Nesting colonies occur in extensive prairie wetlands with cattail, bulrush, or other emergent vegetation. Nests built of floating mats of vegetation, on muskrat houses, or other debris. Water depth at nest varies from 15-180 cm. During the nesting period, individuals stay generally within 30km of colony. Forage over water or in agricultural fields for flying insects, grains/seeds, dragonflies, earthworms, grasshoppers, and other matter.

Key Areas and Conditions for Franklin's Gull in North Dakota

Rather susceptible to botulism outbreaks. The effect of certain agricultural pesticides on this species is unknown. Franklin’s Gulls are sensitive to human disturbance and could abandon a colony if excessive disturbance occurs, particularly during the pre-nesting period. High mortality from collisions power lines. Expanding oil and gas development in North Dakota increases risk of oilfield contamination of wetland habitat. 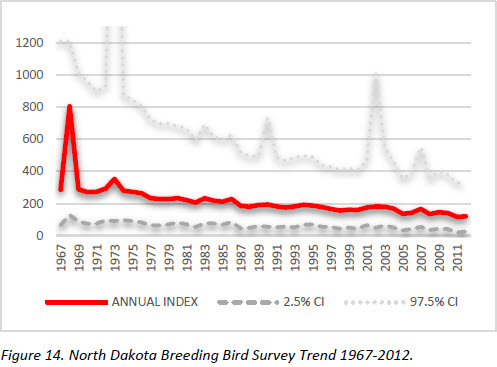 The Franklin’s Gull remains a Level I Species of Conservation Priority. Efforts to identify additional breeding colonies are underway. The species remains at-risk primarily due to the overall limited number of colonies in North America (less than 50 total, less than 20 in the United States). Several State Wildlife Grant Projects (T2-9-R, T-18-R, T-27-HM) have contributed to habitat enhancement of wetlands for Franklin’s Gulls and other wetland dependent birds. 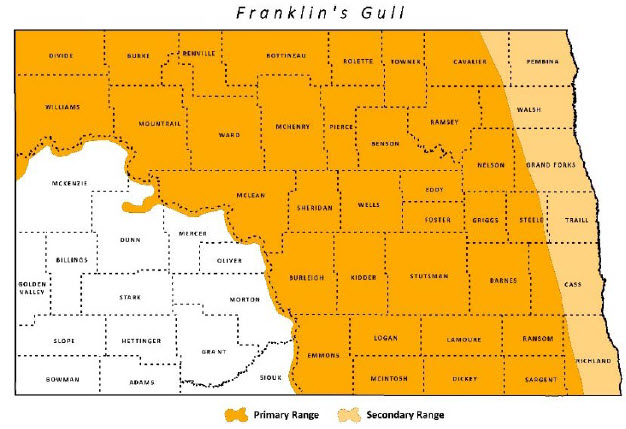