Least Terns use sparsely vegetated sandbars or shoreline salt flats of lakes along the Missouri River System in North Dakota. Usually nest in small colonies (less than 20 nests) with nests spaced far apart. The nest is a hollow scrape, sometimes located among stones. The size of nesting areas is highly dependent on water levels. Forage primarily for small (2-9 cm), non-spiny fish but also shrimp and other invertebrates. Foraging takes place close to the nesting colony.

Key Areas and Conditions for Least Tern in North Dakota

The Yellowstone River, Missouri River, Lake Sakakawea, and Lake Oahe are the only areas in the state where Least Terns reside.

As a result of channelization, irrigation, and dam construction along the Missouri River, the sandbar habitat has been drastically altered, and cold, deep water has changed the forage fish. Encroachment of woody vegetation onto sandbars reduces nesting habitat availability.

Nests may be destroyed by recreationists using sandbars or by the release of water during mid-summer when terns are still on the nest. The effect of bio-accumulation of contaminants in fish prey base is unknown.

Continue to work with the U.S. Army Corps of Engineers and the U.S. Fish and Wildlife Service on long-term monitoring of Least Terns along the Missouri River System. Northern Prairie Wildlife Research Center staff have identified a proposed revision of the monitoring program (see Shaffer et al. 2013). If delisted, a post-delisting monitoring strategy and plan must be developed.

The Least Tern remains a Level II Species of Conservation Priority. The 5-year review concludes the Interior population of Least Terns is recovered and recommends the species be considered for delisting. 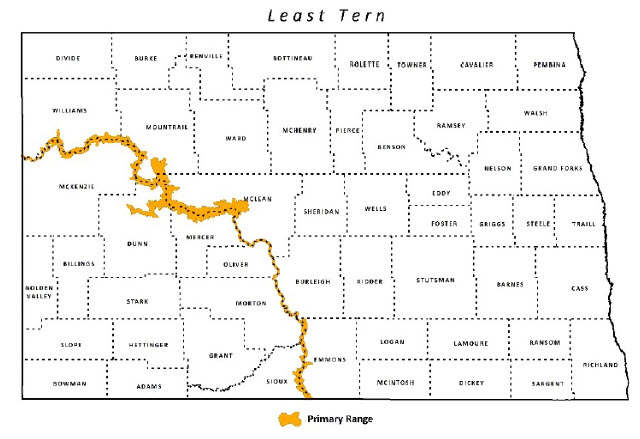