Generally characterized as using exposed, sparsely vegetated shores and islands of shallow, alkali lakes and impoundments for breeding. Salt-encrusted, alkali, or sub-saline semi-permanent lakes, ponds, and rivers with wide shorelines of gravel, sand, or pebbles are preferred. Nest in slight hollow in the sand or shoreline, generally near an object such as a clump of grass, rock, or small log but never in heavy vegetation. Forage on fly larvae, beetles, crustaceans, mollusks, and other small animals near the shoreline or sometimes by the nest.

Key Areas and Conditions for Piping Plover in North Dakota

The Alkali Lakes Core Area. Critical Habitat has also been designated by the USFWS. Many plovers also nest on sandbars of the Missouri River.

As a result of channelization, irrigation, and dam construction along the Missouri River, the sandbar habitat for nesting has been drastically altered. Current river flows do not mimic the natural river flows instrumental in forming sandbar habitat. High water releases during peak breeding season may flood nests. Encroachment of woody vegetation onto sandbars reduces nesting habitat availability. A wet cycle in North Dakota, beginning in 1993, has resulted in high water levels on alkali lakes and inundating breeding habitat.

Predation by several species of avian and mammalian predators is of concern. Mortality from collisions with power lines and collisions with wind turbines is of increasing concern. Intensifying oil and gas development in North Dakota overlaps with much of the breeding range of Piping Plovers and there is increasing risk of oilfield contamination to alkali lakes and the Missouri River system. 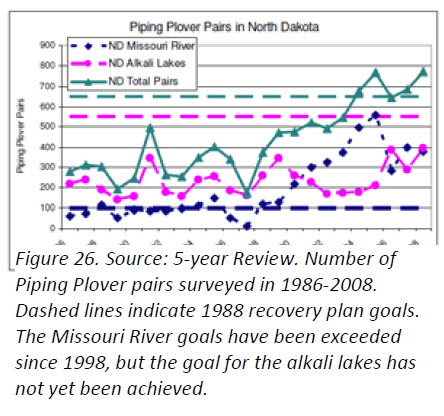 Continue to work with the U.S. Army Corps of Engineers and the U.S. Fish and Wildlife Service on long-term monitoring of Piping Plovers along the Missouri River System. Northern Prairie Wildlife Research Center staff have identified a proposed revision of the monitoring program (see Shaffer et al. 2013). 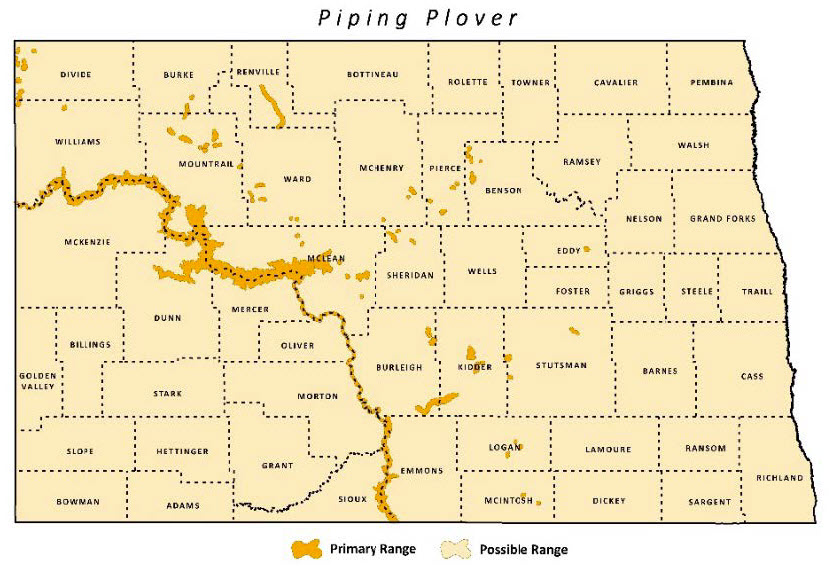