Red-headed Woodpeckers can be found in deciduous woodland in the lowland or upland, along river bottoms, parks, shelterbelts, along roadsides, in open agricultural areas, or in cities. Some habitats it uses can be described as savannah-like. Nest 5-80 feet off the ground in the dead tops or stumps of oak, ash, maple, elm, cottonwood, willow or occasionally utility poles. Cavity is 8-24 inches deep. Breeding pairs may use the same nesting cavity for several years. Forages on the ground, in shrubs, or on mostly dead trees for insects such as ants, wasps, beetles; rarely drills into trees for insects. They will also feed on corn, nuts, berries, and eggs or young birds of passerines.

Key Areas and Conditions for Red-headed Woodpecker in North Dakota

Red-headed Woodpeckers were once a popular target for hunters and a bounty was even offered for each head because of the belief they were major agricultural pests. May be killed by automobiles while plucking injured or dead insects from roads. Some mortality from collisions with communication towers. Other birds may compete with Red-headed Woodpeckers for nesting cavities. 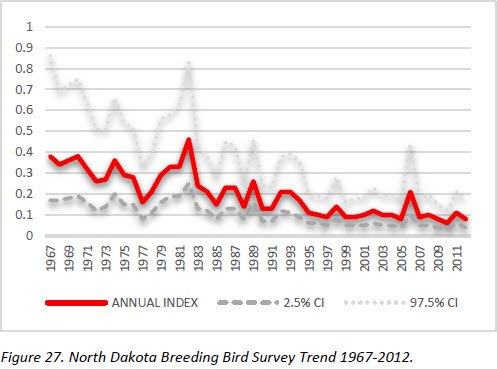 According to the Partners in Flight Landbird Conservation Plan, long-term population trend monitoring such as the Breeding Bird Survey is generally considered adequate, but may not account for some issues (e.g. bias). Ensuring all BBS routes are conducted annually is priority.

The Red-headed Woodpecker has moved from a Level II to a Level I Species of Conservation Priority. 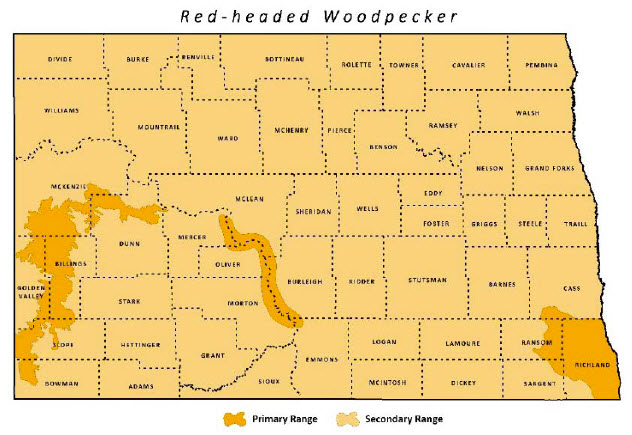