What is a paddlefish, and where are they found? 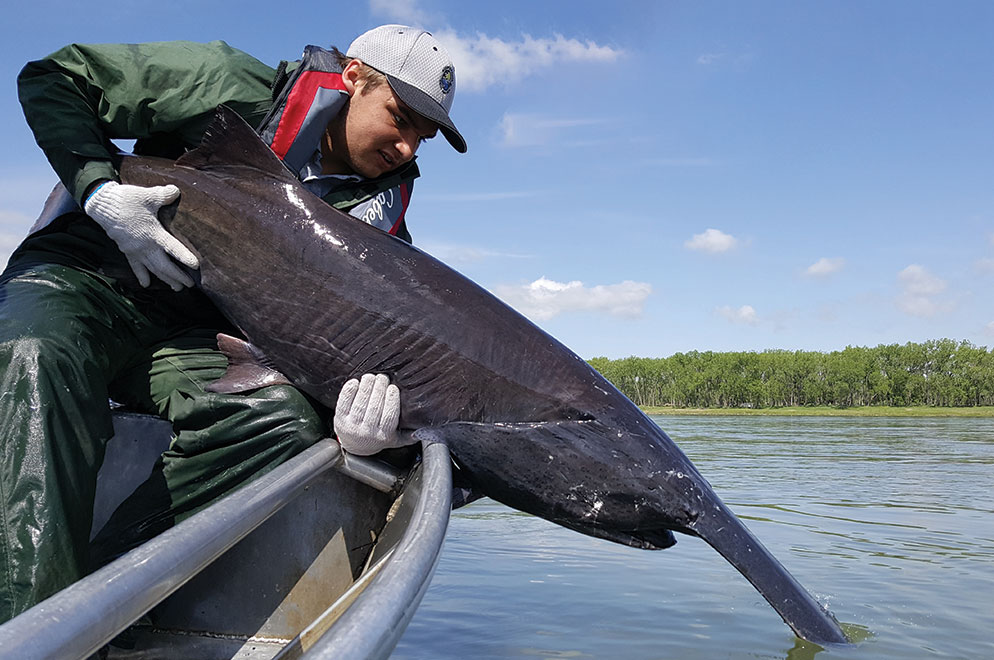 Paddlefish represent an ancient lineage of fish most closely related to sturgeons. There are only two species of paddlefish in the world; an extremely endangered (possibly extinct) species found in China, and our North American species, currently found in 22 states throughout the Missouri and Mississippi river basins. The North American species has also recently been introduced into several rivers in Europe and Asia. Fossils of extinct paddlefish species from 60 million years ago have been found in the Missouri River basin near Fort Peck Reservoir. The North American species has a mostly cartilaginous anatomy, an elongated, flat, paddle-shaped rostrum, smooth skin, small eyes, and a large, toothless (except when very young) mouth. Their overall coloration ranges from light bluish gray to blackish, with a whitish belly.

What do paddlefish eat, and how do they do it? 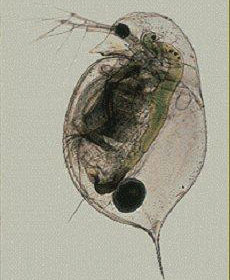 What is the purpose of the rostrum? 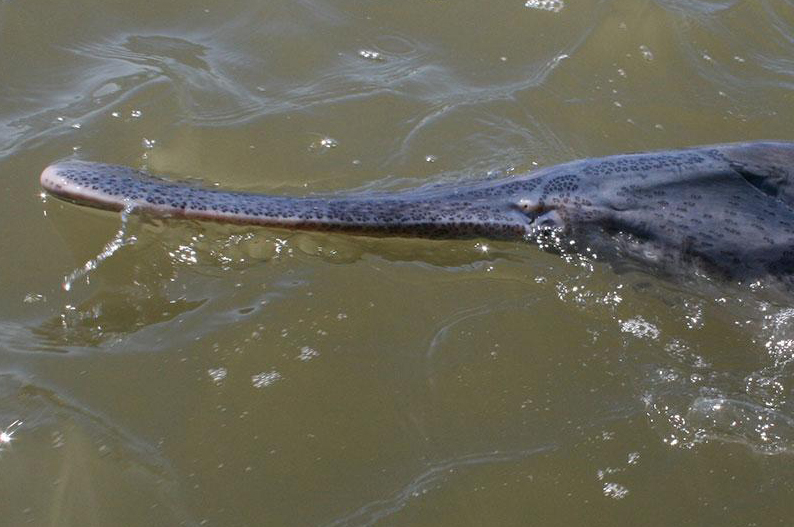 Very young fish do not even have a rostrum. But by the time a fish reaches 8 inches, the rostrum may be nearly half its total length. As fish get older and larger, the rostrum becomes comparatively shorter in terms of its proportion to the total length of the fish. Adult paddlefish can function and survive without a rostrum, but it appears that those fish that have lost all or part of their rostrum feed less efficiently and are thinner than those with intact rostrums.

What is the life cycle of paddlefish in the Yellowstone-Sakakawea stock?

Mature paddlefish migrate upstream out of Lake Sakakawea into the Yellowstone and Missouri rivers to spawn. Most fish make this migration in early spring, but some start the previous fall. They spawn during high runoff in late spring or early summer. Most fish deposit eggs and milt on flooded gravel bars in the lower Yellowstone River, but some fish migrate up the Missouri River and even into the Milk River in Montana. Soon after spawning, adults typically move back downstream into Lake Sakakawea.

The eggs are fertilized by milt as they are released from the females. When exposed to water, the eggs become very sticky and adhere to gravel and cobble substrate. Incubation time varies depending upon water temperature; eggs hatch in about 7 days in 60°F water. After hatching, young (larval) fish drift downstream, eventually reaching the headwaters of Lake Sakakawea where they spend their first few months. Because of greater zooplankton abundance, older juvenile and adult fish also utilize the upper portions of Lake Sakakawea. With the exception of spawning migrations, paddlefish remain within Lake Sakakawea. Paddlefish typically mature at about age 9 or 10 for males, age 16 to 18 for females. Tagging studies have shown that males spawn more frequently than females. Males spawn every year or every other year, while females typically spawn every second or third year.

What do we know about young paddlefish in Lake Sakakawea? 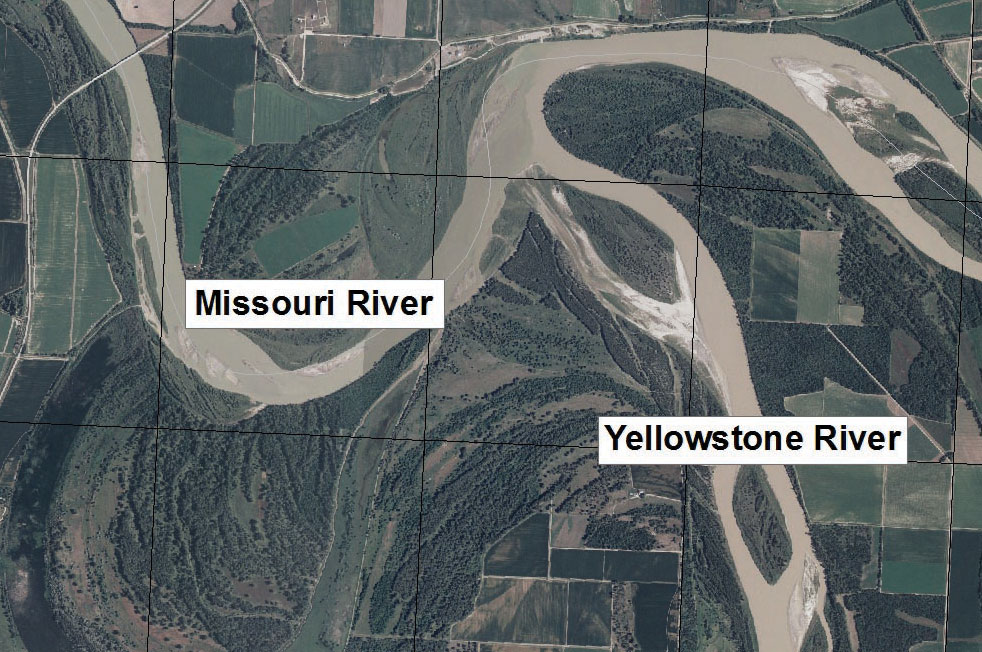 Larval paddlefish grow rapidly. By late July they’re typically 5-6 inches long, and 10-12 inches by late September. From mid- July through September they’re found in the headwaters of Lake Sakakawea. Young paddlefish swim in loose groups, selectively feeding mainly on zooplankton, and especially on a large zooplankton called Leptodora. The rapid first-year growth is an important survival tactic, since they’re comparatively weak swimmers and vulnerable to being eaten by fish and birds. Studies have shown that young paddlefish grow faster when Sakakawea’s water elevations are high and rising, since zooplankton is more abundant under these conditions.

How can you tell how old a paddlefish is, and how long do they live? 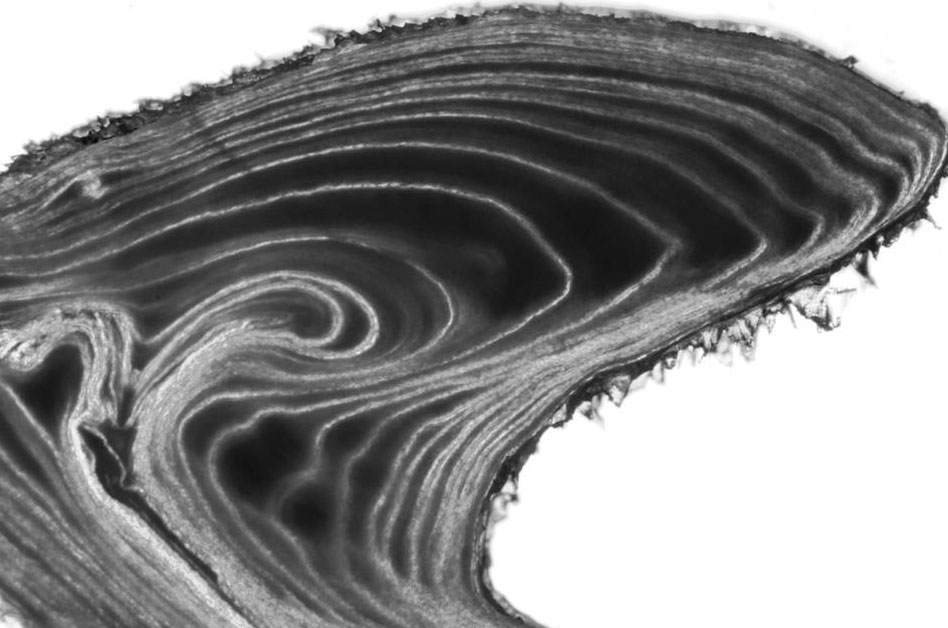 The best way to determine age is to use the lower jaw bone called a dentary. Dentaries are removed from the majority of harvested fish during snagging seasons, then cleaned and cross-sectioned. Annual rings are counted on the cross sections (much like aging a tree using tree rings).

Paddlefish can live to age 60 or older, with females typically living longer than males. Most of the larger fish (more than 50 pounds) are females ranging in age from 15-40 years and averaging about 27 years, while most of the smaller fish (less than 40 pounds) are males from 9-40 years and averaging about 20 years. Maintaining a wide range of ages is important to the health of the population.

How big do paddlefish get, and why are females typically larger than males? 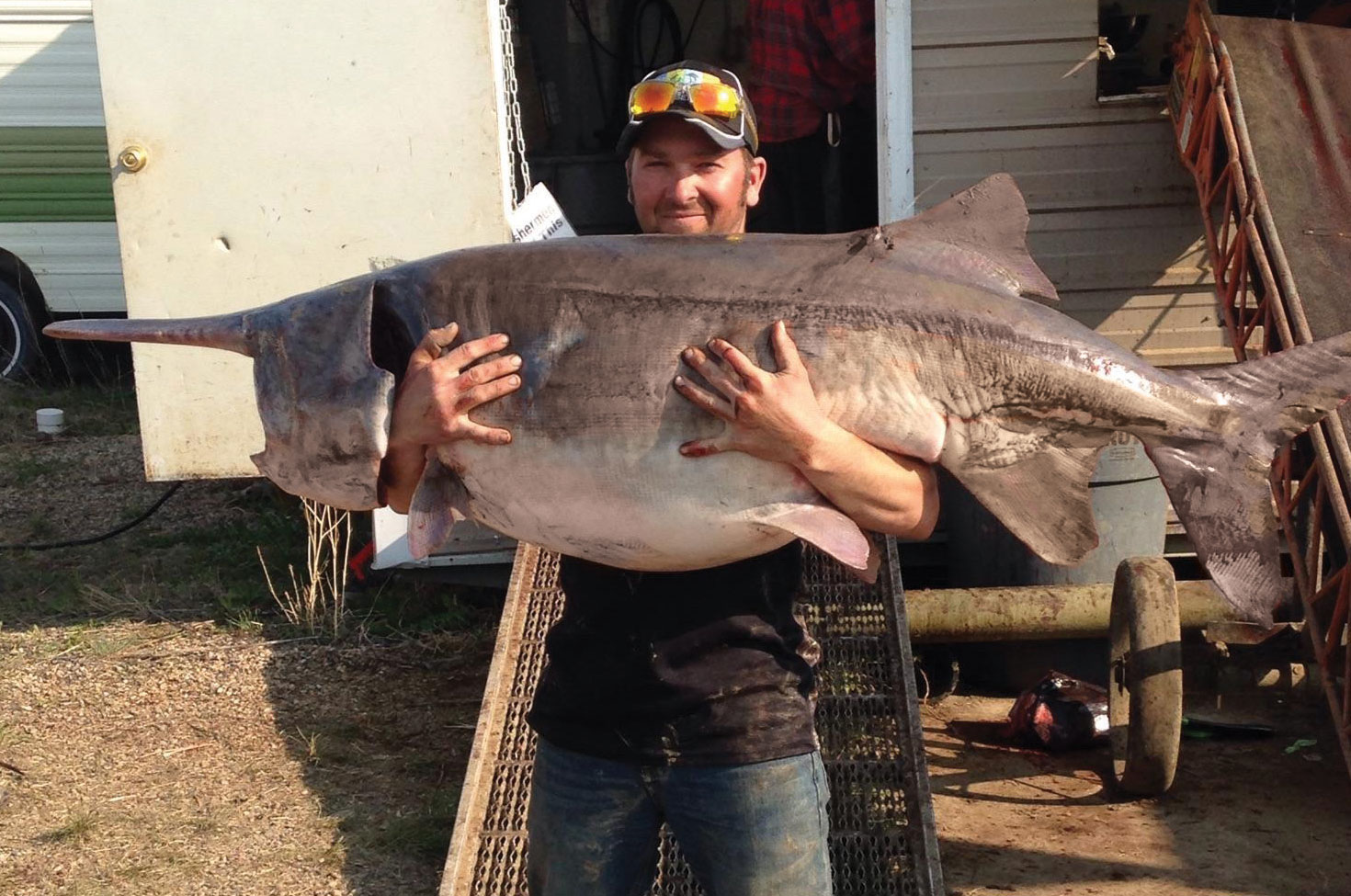 A state record paddlefish weighing 131 pounds and measuring 71 inches snagged near the Confluence in 2016.

Male and female paddlefish have evolved different strategies for passing genes to the next generation. For a female, the larger she grows the more eggs she can develop and the more young paddlefish she can potentially produce. For a male a larger size is not nearly as advantageous, because even a small male produces millions of sperm, more than enough to fertilize all the eggs from the largest female.

Why are paddlefish relatively common in the Williston area when they’re so rare or no longer present in other areas within their range?

The short answer is habitat quality for paddlefish, which is generally much better for all life stages in Lake Sakakawea and the Yellowstone and Missouri rivers than elsewhere. Paddlefish are finicky spawners, requiring a combination of high flows, right water temperature, and a good substrate of clean gravel and cobble. The Yellowstone River is still a free-flowing, naturally fluctuating river that provides adequate spawning habitat most years. When Lake Sakakawea has a high water level, paddlefish generally find abundant food for growth and maturation. During extended periods of low lake levels, however, plankton is far less abundant, and survival of young paddlefish is greatly reduced.

In other parts of its range, habitat quality is generally much poorer. Dam construction, dredging, channelization, and excessive water withdrawals for irrigation and municipal and industrial use have significantly changed most large rivers in North America. Few rivers today provide the proper combinations of flow, temperature and gravel substrates suitable for paddlefish spawning. In many states, paddlefish populations have been greatly reduced or even eliminated because of lost spawning habitat.

Why not just stock more paddlefish?

The best management approach for long-term sustainability of paddlefish in North Dakota is to maintain quality habitat for sufficient natural reproduction and recruitment. Stocking efforts in the state have yielded mixed results. Larger fish (4 per pound) stocked in 1995 in Lake Sakakawea have recruited to the fishery, but smaller fish stocked in 1997 (10 per pound) have not, suggesting that larger fish at stocking are preferred. Even in the successful stocking of 1995, naturally recruited fish have made up about 95 percent of this year-class, so natural recruitment is the key to a good fishery. Stocking has its uses, however. The most recent stockings of tagged young-of-year paddlefish have occurred in 2007, 2011 and 2018 to better understand juvenile paddlefish survival in years of low reservoir water levels and high river and reservoir levels and to have some known age fish in the population to compare with estimated ages from jawbones.

Why is there a paddlefish harvest cap? 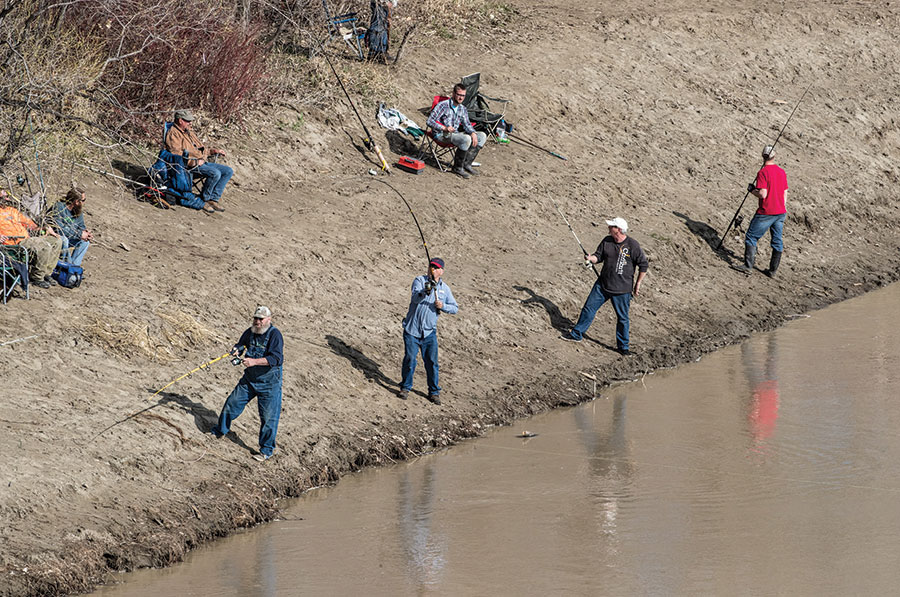 Snagging for paddlefish on the Yellowstone River.

The harvest cap is intended to keep the adult population from dropping below its current level. Age information is used to estimate how many newly recruited adult fish are entering the population compared to the number of fish being harvested or lost to natural mortality. A harvest cap of 2,000 fish, equally split between Montana and North Dakota, is appropriate based upon current rates of recruitment. Changes in the allowable harvest will be made, as necessary, to prevent the population from declining.

Is the Yellowstone-Sakakawea paddlefish population increasing or decreasing?

The paddlefish population in the Yellowstone and Missouri rivers prior to construction of Garrison Dam was much smaller than the booming population which developed during the years when Lake Sakakawea first filled. Initial flooding of productive uplands released many nutrients into the newly formed reservoir, resulting in excellent rearing conditions and high survival of young paddlefish. In the years since the late 1960s after the reservoir filled, however, the population has gradually declined because of lower productivity (a natural process in reservoirs), and harvest and natural mortality of fish produced during the filling period.

Population estimates indicate that the adult population has declined from more than 100,000 fish in the late 1970s to somewhat less than 50,000 in recent years. Studies have shown that although paddlefish reproduction is occurring, the overall recruitment of young fish hasn’t been high enough to offset mortality of adult fish. Fortunately, the 1995 year-class has reversed the downward population trend. This robust year-class was produced under ideal conditions of high Yellowstone River flows and rising water levels in Lake Sakakawea. From 1999 through 2007, drought and water depletions greatly reduced Yellowstone River flows, negatively affecting paddlefish spawning and reproduction. The lower than normal inflows, coupled with excessive rates of water discharge by the U.S. Army Corps of Engineers, consequently lowered Lake Sakakawea’s water level far beyond that desired for good paddlefish recruitment and growth. Greatly improved water flows and lake levels since 2008 have provided better conditions for successful reproduction and recruitment, especially in 2011, which appears to be providing the next large year-class of paddlefish.

What is the greatest threat to paddlefish?

The greatest threat is the loss of habitat for successful spawning and recruitment. Paddlefish need natural, free-flowing rivers to reproduce effectively. Without spawning habitat there’s really little that can be done to maintain viable populations over the long term. Water withdrawals from the Missouri and Yellowstone rivers are reducing available habitat. Protecting and enhancing habitat and flows in these rivers are critically important for the long-term survival of the stock.

Snag fisheries are regulated to ensure that the Yellowstone-Sakakawea stock is not overharvested. Illegal fishing is a major threat, however, and has been documented in several other states. Any illegal harvest activities should be reported.

How do research and monitoring lead to better paddlefish management? 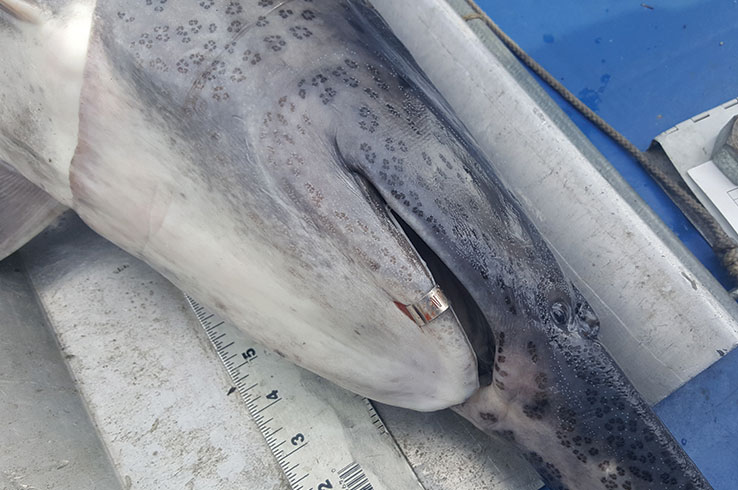 Unique and important fisheries resources need to be managed carefully and conservatively. Intensive research and monitoring are necessary to properly manage this resource. Because the Yellowstone-Sakakawea stock is a shared resource between North Dakota and Montana, fisheries staff from both states and scientists from the University of Idaho work together to research and manage this stock.