North Dakota Game and Fish Department fisheries biologists released roughly 2,500 paddlefish young in early September into the upper reaches of Lake Sakakawea, where food and habitat conditions are best suited for their survival.

While the 10- to 13-inch paddlefish will complement a population that relies mostly on natural reproduction, the recently released fish will more importantly serve as a reliable measuring stick when the fish reach sexual maturity years down the road.

“The primary benefit of releasing hatchery raised paddlefish into Sakakawea is not meant to boost the population any significant amount, but to serve as age markers within the population,” said Dave Fryda, Department Missouri River System supervisor in Riverdale. “While these 2,500 paddlefish will contribute to the fishery to some extent, that number is pretty small when you compare it to natural reproduction.” 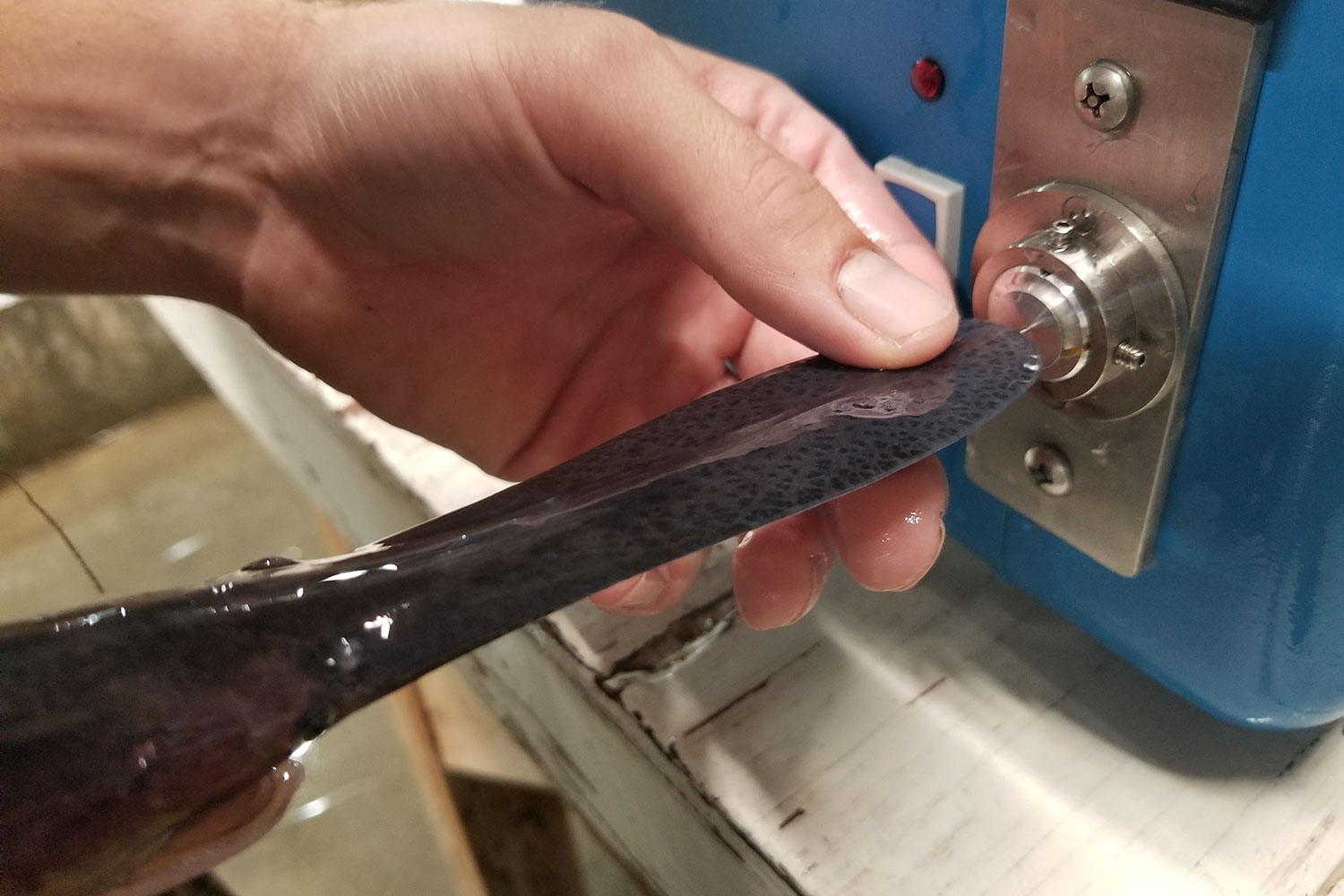 The paddlefish were raised last summer in Garrison Dam National Fish Hatchery from eggs taken from adult fish netted in upper Sakakawea and the Garrison Tailrace. Before their release, coded wire tags were inserted into the end of the rostrums, or bills, of the young paddlefish.

Fryda said the metal tags, which are about 1 millimeter in length, are hidden from the human eye, but are detected when a wand is waved over the rostrum of a harvested fish.

Game and Fish personnel have tagged young paddlefish periodically since the 1980s. Of late, fish were fitted with the tags in 2007 and 2011 and released into the Missouri River System.

Biologists age paddlefish hatched in the wild by counting the growth rings in the lower jaw bone after harvest. This method of aging is further validated when compared to the tagged fish.

“We know what their jaws look like for growth rings and then we can compare them to the tagged, known-age fish,” Fryda said. “We know exactly how old the tagged paddlefish are, so it is kind of a calibration method to verify what we believe the age is of wild fish.”

Knowing the age structure of paddlefish in the population, Fryda said, is important in managing the species. While paddlefish are long-lived, some live up to 50 years or more, their reproduction and recruitment into the population is sporadic.

“Paddlefish will have one big year-class maybe every 10 to 15 years, and we are reliant on that year-class to support the bulk of the fishery for quite a few years before another year-class moves in,” Fryda said. “So, it is critical to know the age structure of these fish when determining safe harvest levels, so we know that harvested fish are being replaced by new recruits.” 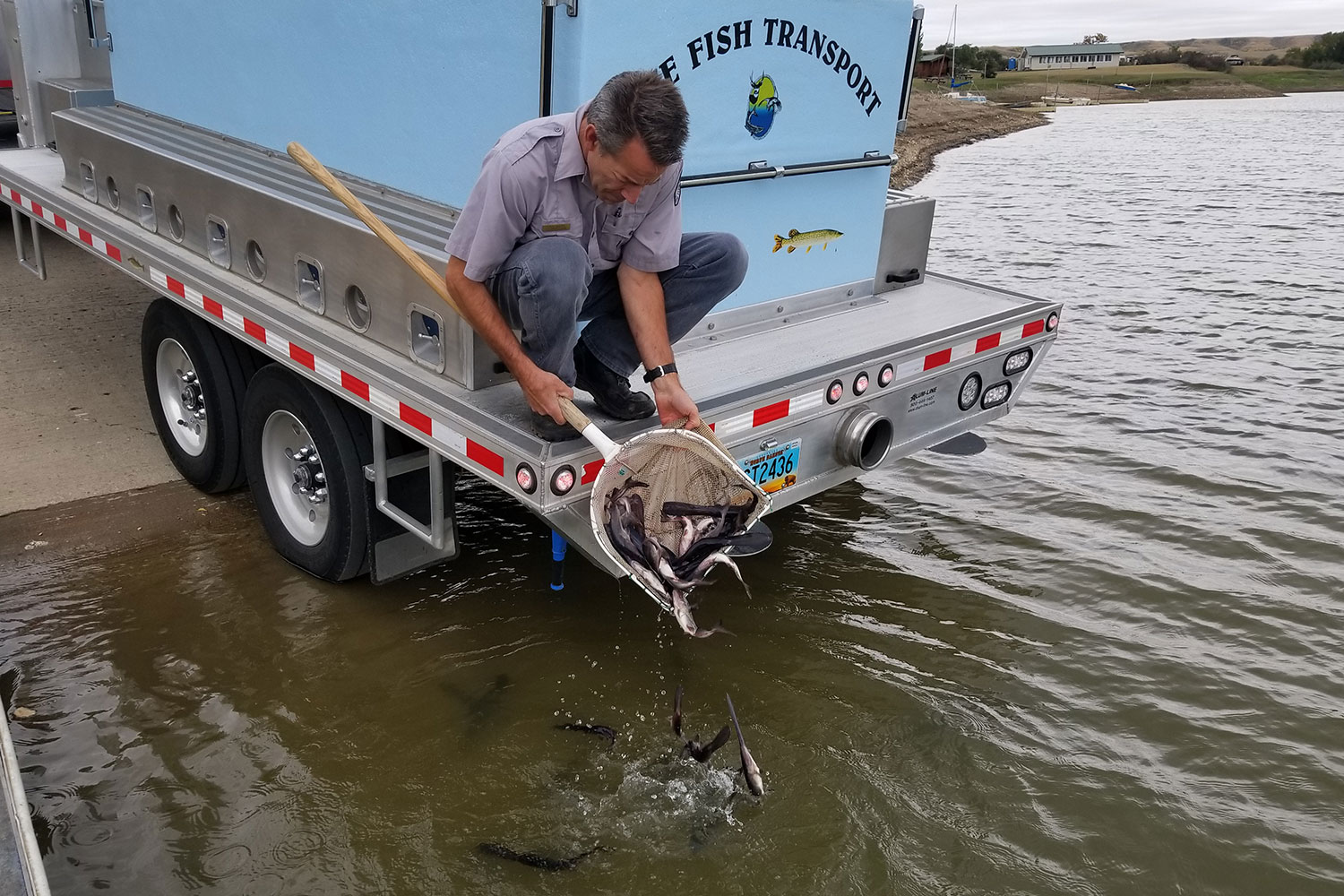 Scott Gangl, Department fisheries management section leader, said the 1995 paddlefish year-class has dominated the snagging harvest for the past decade. And fisheries biologists are starting to see some indications of a pretty good 2011 year-class, but it will be another two to three years to know the magnitude of that class as those fish mature.

The paddlefish harvest cap for North Dakota is 1,000 fish. It has remained at this mark since 2003. High flows in 2018 hindered snagging success and the cap wasn’t reached for the first time since 2009.

Most years though, the harvest season has closed early because the cap was reached before the official season-closing date.

The paddlefish targeted during the snagging season beginning May 1 are sexually mature fish that are making their spawning run up the Yellowstone River. Because it takes years – 7-10 years for males and about 15 years for females – for this species to reach sexual maturity, the fish tagged and released by biologists in 2018 will not be seen by snaggers until 2028 or later.

“These fish will be spending years, the majority of their lives, swimming around Sakakawea and feeding before they go on their first spawning run,” Fryda said.