A Conversation With Scott Winkelman

It’s late October at the time of this interview and North Dakota’s deer gun reason is around the corner. Pheasant hunters have been in the field for a couple weeks and waterfowl hunters have been decoying birds longer than that.

It’s a busy time in North Dakota’s outdoors, always is this time of year, and that’s especially true for the Game and Fish Department’s enforcement personnel.

Scott Winkelman took over as chief of enforcement in early October, replacing Robert Timian, who retired after 35 years with the agency. 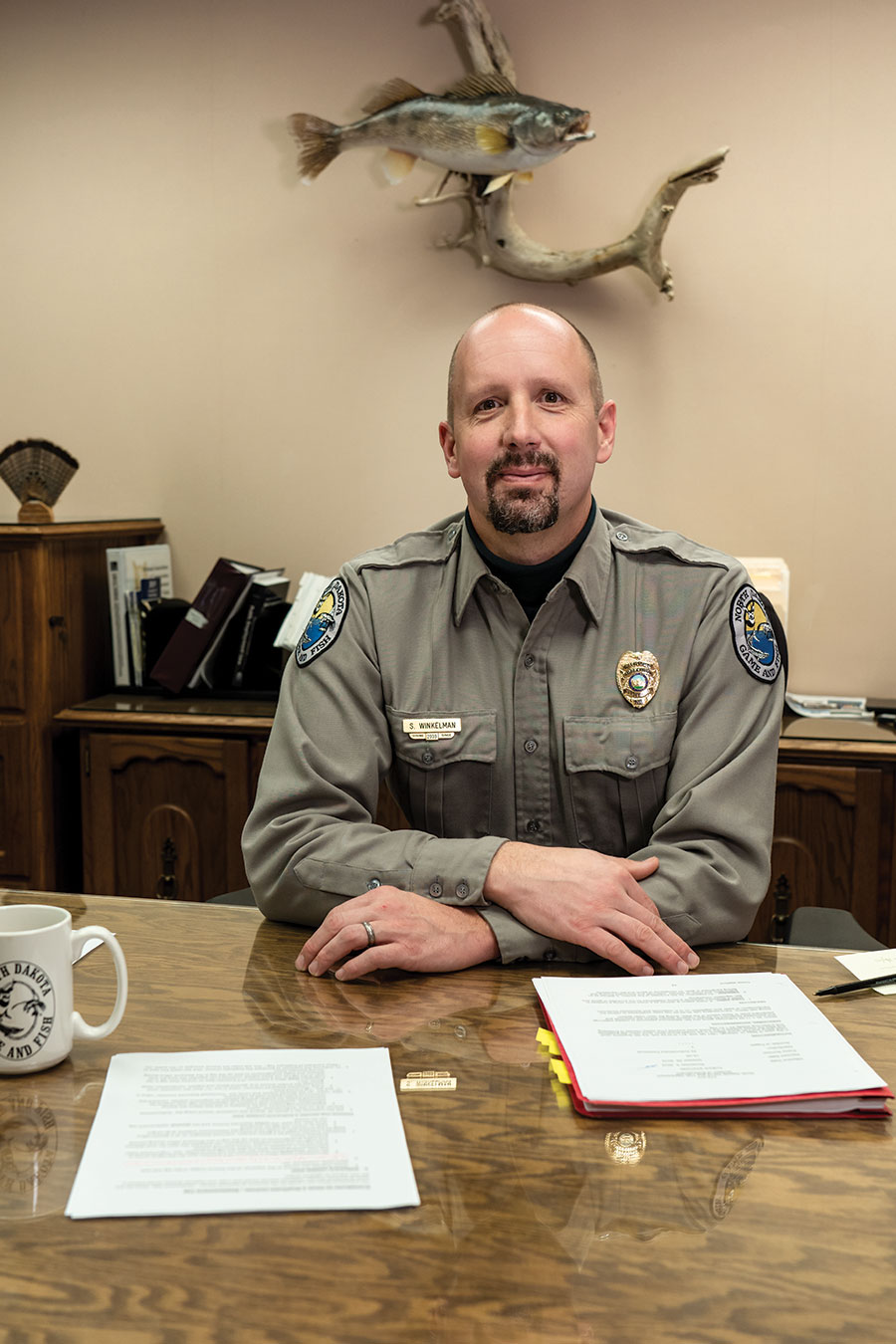 NDO: What is your professional background?

Winkelman: I started as a conservation officer in South Dakota in 2002. I moved to North Dakota in 2003, and I was the district game warden in Bottineau until 2007. That’s when I moved to Bismarck as the wildlife investigator, and in 2015 I was promoted to investigation supervisor.

Winkelman: I went to college at the University of North Dakota and got a bachelor's degree in fisheries and wildlife biology. While I was doing that, I started working for the U.S. Fish and Wildlife Service seasonally. And the more I was around other wildlife professionals, I just gravitated toward the enforcement side. I enjoy being able to work directly with hunters and anglers and those who are utilizing our resources.

NDO: As you mentioned, you were the investigative supervisor before being named division chief. Tell us about your management style?

Winkelman: I will be very supportive of our game wardens. I feel we hire very competent, talented, educated, skilled people to be game wardens in North Dakota. But while I'm supporting them, I'm fairly hands off because we hire such good people. I trust them to do their jobs and they do it well.

NDO: What are some of the challenges you foresee as the new division chief?

Winkelman: These are certainly trying times for enforcement in general. With the COVID pandemic going on, it’s uncertain where that will take us, but we’ll continue to react to it on a daily basis and see where it takes us in the future.

NDO: The North Dakota Game and Fish Department is a small agency when compared to others around the country. Knowing this and understanding how big the state is physically, how demanding is it for your staff to do their jobs?

Winkelman: It certainly is demanding and a challenge at times. We are a small agency and a small division. We have 39 total employees in the enforcement division, but only 28 field wardens. So, they do have to cover large areas and they do a tremendous job with what they're allowed to do, but it can be a challenge at times.

NDO: Along those same lines, with significant increases in fishing and hunting license sales in 2020, which means more people on the water and in the field, how are your wardens adjusting to this rise in participation?

Winkelman: They've been handling it well. They're certainly taking more calls, they're making more contacts in the field. They've been busy, but they're doing a tremendous job. With maybe some new hunters and anglers out there this year with increased license sales, we haven't seen a lot of problems with people not knowing what rules they are supposed to be following. They do a pretty good job of following our regulations. And part of that is we like to keep our regulations simple and easy to understand and follow.

NDO: As a game warden, especially this time of year with the deer season in full swing, pheasant hunters on the landscape, the list goes on, are there enough hours in the day to safeguard North Dakota’s natural resources?

Winkelman: You know, sometimes it doesn't seem like it, but the wardens do a good job of knowing where to go and when to be there. And they do a great job of protecting our natural resources. Our wardens try and be out and maximize their time when hunters are actually going to be out in the field.

NDO: Let’s think year-round, not just fall in North Dakota. Are there some things of interest, some priorities you want your staff to focus on?

Winkelman: With aquatic nuisance species slowly expanding in places in the state, we're trying to do everything we can to keep that from happening. In the summer, and even in the fall with waterfowl hunters, the wardens do seriously look for those violations. ANS is certainly a focus area. Along those same lines, curbing the spread of chronic wasting disease in the state is also another issue of concern our wardens will focus on.

NDO: How has technology, especially in the last decade, changed how your wardens do their investigations?

Winkelman: Technology has completely changed our jobs. Today, even compared to when I started as a warden, everybody has a mobile computer in their hand that they carry with them and they're posting pictures, they're chatting instantly as things are happening. So, we're always reacting, trying to investigate based off of social media tips. We get a lot of complaints based off of social media and it is an item that we are looking at on a constant basis.

NDO: The Game and Fish Department often promotes the Report All Poachers program. How big of a role does the public play in helping wardens do their jobs?

Winkelman: RAP plays a huge role and is one of the most important programs we have. With our limited number of wardens in the field, we can't be everywhere. And when the public, hunters and anglers witness a violation and make that phone call to us and get the information to us, it is a huge help. And quite frankly, we would have a hard time being successful at our jobs without the RAP program, and the Wildlife Federation and their help in running the program. While we do get a lot of calls through the RAP line (701-328-9921), those of us in the enforcement division also get a lot of phone calls directly to our phones also because they're all published on the Game and Fish website. Again, the RAP line is staffed 24 hours a day, seven days a week. So that is a good number to call if you need to get in touch with a game warden because you witnessed a violation.

NDO: Anything else? Any last remarks to those people who participate in the many opportunities afforded them in North Dakota’s outdoors?

Winkelman: Everybody have a safe, enjoyable fall and winter, and if you see or witness any violations, please give us a call.