Kevin Kading, Game and Fish Department private land section leader, addresses the status of the Private Land Open To Sportsmen program. The popular walk-in access program has been on North Dakota’s landscape for more than 20 years.

Q: Where does the PLOTS program stand this year in comparison to the last few years in terms of the number of acres?

A: When we set out this year for the sign up, Game and Fish Department private land biologists developed some goals and work plans for the PLOTS program in an attempt to anticipate the number of acres to be enrolled and added to the program. We set out to have 786,000 acres in the program. That was what we anticipated we would have if we hit our marks, if we hit our goals and what we had money budgeted for. Biologists met and exceeded that goal this year, with 791,000 acres, which was good and that was just because there was interest out there. Our biologists put in a lot of legwork this year meeting with landowners, putting out promotional materials, holding workshops … a lot of different promotional activities to try to drum up interest and let landowners know about the program. It wasn't really a surprise that we got those acres, we put in a lot of work to get those acres. But it's welcome to see additional acres versus what we had anticipated.

Q: After carrying more than 700,000 acres for the last several years, and the numbers are even trending higher, is a goal of 1 million acres still realistic down the road?

Q: It’s mid-July and still weeks away from the fall hunting seasons, but what kinds of reports are you hearing about how enrolled acres are looking this year?

A: The conditions have been such that the cover, the wildlife habitat is really looking good this year. Hopefully, that translates to some good habitat this fall and it sure looks like it will. We're not looking at any major drought issues or anything like that, yet I know there are some parts of the state that are a little drier than they want to be, but overall habitat conditions are looking really good on Department PLOTS tracts and elsewhere. There are still going to be some areas that hunters come across on PLOTS that have some haying or grazing being done on them, but that's part of the landowner’s PLOTS agreement, too. Some of those acres are under agreements that are for working lands and landowners can still do those activities on their PLOTS tracts. But overall, hunters will hopefully see some pretty good habitat conditions come fall.

Q: The PLOTS program has been around for 20-plus years and is widely recognized by hunters in North Dakota. What is the status of the program today?

Q: While many of the state’s Conservation Reserve Program acres have been lost, how does this federal idle grass program factor into the PLOTS program?

A: To put things into perspective a little bit, prior to 2007 there was just a lot more CRP on the landscape in the state, and the ability to enroll those acres in the PLOTS program was great for the Department. There are several different avenues that landowners can take to put land in the PLOTS program and one of the most common avenues is through CRP. If they have CRP and they are looking to get some additional incentives for public access, or help with planting the grass or some cost-share on establishing that cover, that's where the PLOTS program has come in. Prior to 2007, 2008, 2009, there was a lot of those opportunities out there. Fast forward to where we’re at now, the CRP program in the state is less than half of what it used to be and there are just fewer opportunities for those acres to go into the PLOTS program. That's kind of the relationship a lot of people maybe don't understand, or don't see the connection, but that’s the way it is. When CRP acres become available, we certainly welcome those acres as additions to the PLOTS program, but when they're not out there, when they're not available, that is just one less acre in the PLOTS program. The outlook for the CRP program in North Dakota now that the farm bill has passed may provide some more opportunities for CRP, but it’s unlikely it will be like it was back in the early to mid-2000s.

Q: Anything new the agency is working on to improve the PLOTS program for wildlife, landowners and hunters?

A: Some of the things that private land biologists have focused their time on in the last couple of years has been enhancing the existing acres the PLOTS program does have. The biologists visit with the landowners and talk to them about habitat enhancements, whether that's new grass plantings or adding some food plots or cover crops to their area. We have seen some interest in these enhancements. In fact, this year part of the total increase in PLOTS acreage is about 5,000 acres of new grass … some of those acres are brand new habitat going into the fall hunting season and will be on the landscape for many years to come. This new grass gets planted and it's on the landscape for 6 to 10 years or longer and will benefit the program for many years.

Q: What do you hear – both good and bad – from landowners who are enrolled in the PLOTS program and from hunters who hunt PLOTS acres?

A: Landowners are still interested in the program and the agency gets some positive comments. The PLOTS program is very flexible. We've tried to make it workable for landowners and that's one of the things that attracts the interest … we're pretty easy to work with and the PLOTS program offers a lot of different options. It’s not all about just having CRP. You can have other land that might have cropland or pastureland or grazing lands, so there's a lot of different opportunities for landowners to put their land in the program. Our biologists in the field are knowledgeable about all the different partnership programs, including USDA programs and others, that Department staff can try to help landowners work through, as well as piggybacking on our PLOTS program. Every year we hear from hunters, we get photos of people who had some success and of kids getting their first bird or their first deer on a PLOTS tract. We try to relay this information back to landowners to let them know they are making a difference out there. Overall, hunters, I believe, still have a really positive view of the PLOTS program.

Q: It’s imagined that many hunters carry dog-eared copies of the latest PLOTS Guide in their vehicles to help guide them to the various PLOTS tracts and other public lands. Yet, are hunters nowadays finding the location of the lands in other ways?

A: Hunters can use the paper-copy PLOTS Guide to find tracts they want to hunt, but there are other options available. Most people nowadays are carrying a smartphone in their pocket. There's an app you can find on the Game and Fish Department website, gf.nd.gov, that hunters can download on their phones, which is basically an electronic version of the PLOTS Guide. So, if people want to use that to navigate around the countryside, it works pretty well. Also, on the Department’s website there's an online mapping application that hunters can use if they want to look at some areas ahead of time or maybe print some maps of where they're going.

Q: If a landowner is interested in the PLOTS program, who can they contact to get the information they seek?

A: The Game and Fish Department has eight private land districts. Landowners can find those districts, and the name and phone numbers of the biologists on the Department’s website at gf.nd.gov. If a landowner is interested in talking to a private land biologist in their area about enrolling in the PLOTS program, I'd encourage them to make a phone call. Department biologists can come out, take a look at the land and talk about the opportunities available through the PLOTS program.

Q: Anything you’d like to tell hunters planning to utilize these private lands made available for walk-in access this fall?

A: A lot of times, and in a lot of minds, the PLOTS program gets lumped in with the public land category. People just assume PLOTS is public land. It's available for the public, but it's still privately owned and it's an agreement that we have with the landowner. When hunters are out hunting on PLOTS land, they need to remember they’re on private land and there might be some farming going on, there might be some haying or some harvesting going on … they need to be aware of that. They need to be aware of where they park their vehicles, which direction they are shooting, which direction they are hiking … It's private land and we want hunters to leave a good impression on landowners when they are hunting the PLOTS tracts. 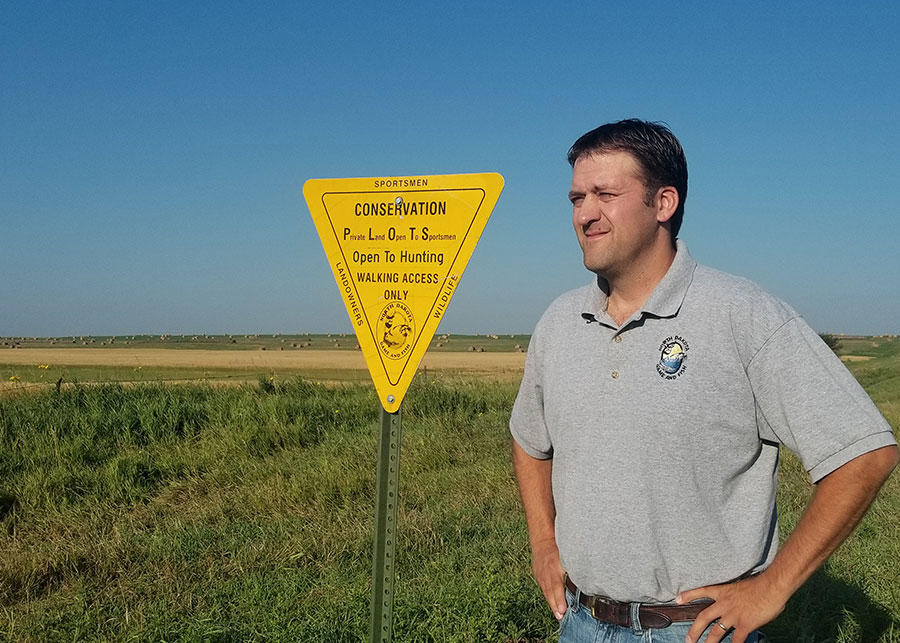