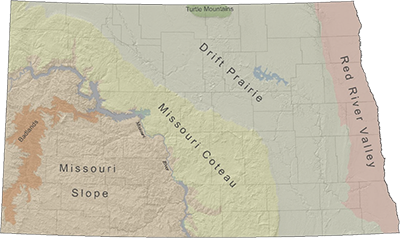 North Dakota sits geographically from longitude 97°W to 104° W and latitude 45° 55'N to 49°N and is the 19th largest state. It is 211 miles north to south and 340 miles east to west and for a total 70,704 square miles. Dependent upon weather conditions, 2 to 4 percent of that area may be covered by water. North Dakota is bordered by Minnesota on the east, Montana on the west, South Dakota to the south, and the Canadian provinces Manitoba and Saskatchewan to the north. The state’s highest point is White Butte in the southwestern corner of the state, standing at 3,506 feet above sea level. The lowest point at 750 feet above sea level is in extreme northeastern North Dakota. 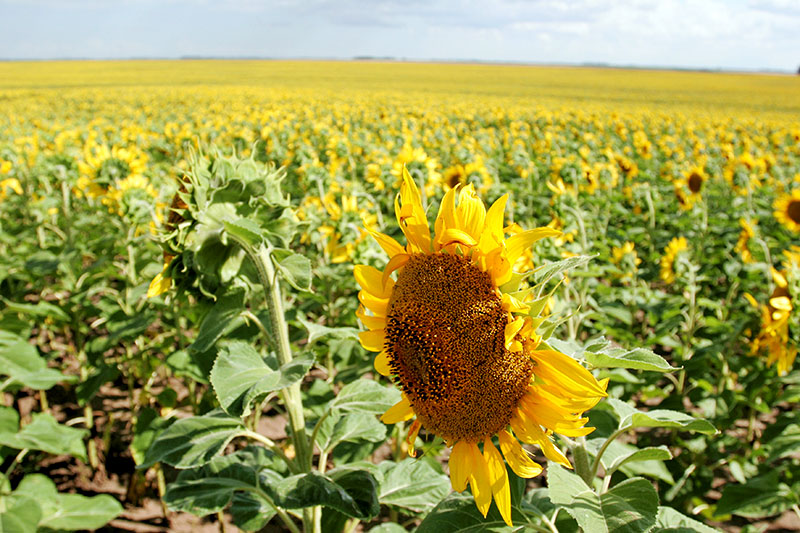 The Red River forms the eastern border of North Dakota. The Red River Valley extends 30 to 40 miles on either side of the river. This flat plain was once the bed of Glacial Lake Agassiz. Most of the region is covered by silt and clay deposits consistent with a lake bottom. Beach ridges scattered throughout the valley mark the former shoreline of the giant lake, at various periods of time. The valley rises 500 feet over a bedrock escarpment to mark the natural boundary of the Red River Valley. 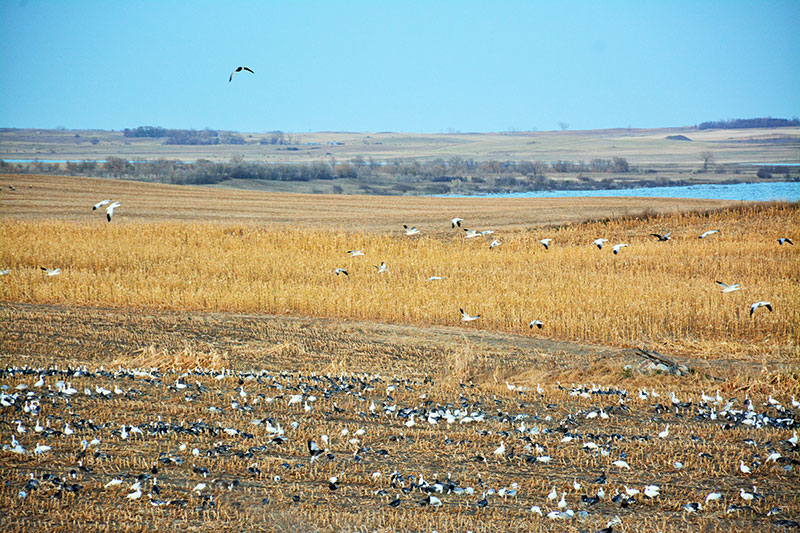 The Drift Prairie extends diagonally from northwestern to southeastern North Dakota. The land is glaciated, appearing generally flat with washboard like undulations. Soil and weather conditions promote a transition zone between short and tallgrass prairie species. High concentrations of seasonal and temporary wetlands are interspersed throughout the landscape. Grain farming is the major land use of this region, but also soybeans, dry beans, corn and canola. 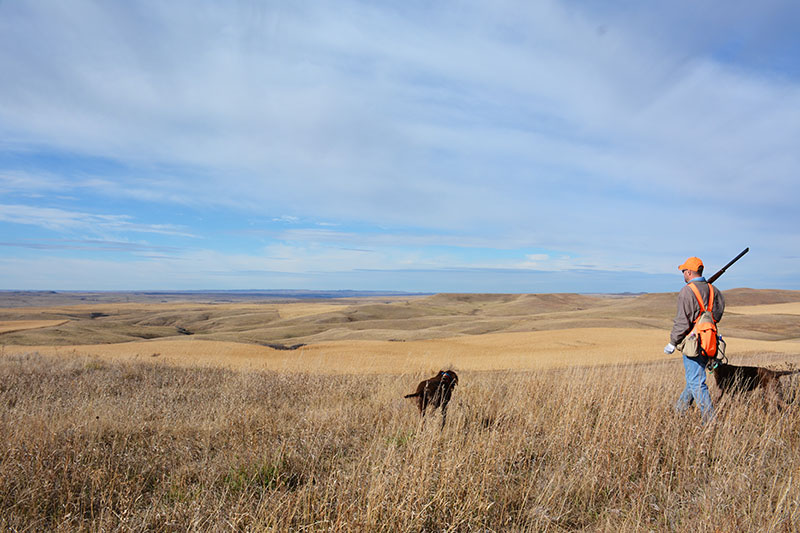 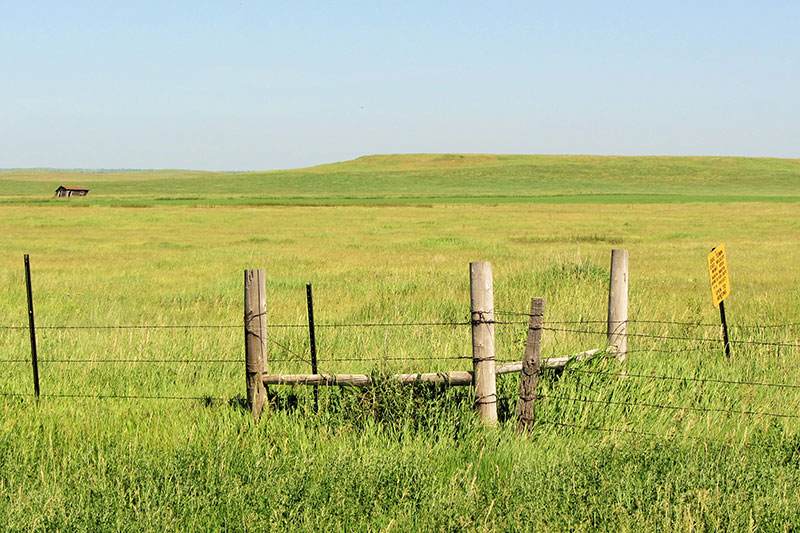 The Missouri Slope’s sandstone and shale layers were largely unaffected by glaciers that covered the eastern half of North Dakota. The area has an irregular topography with the occasional butte rising above the landscape. Complex drainage systems cut breaks through the topography. Livestock grazing is the predominant use, with some small grain farming mixed in. 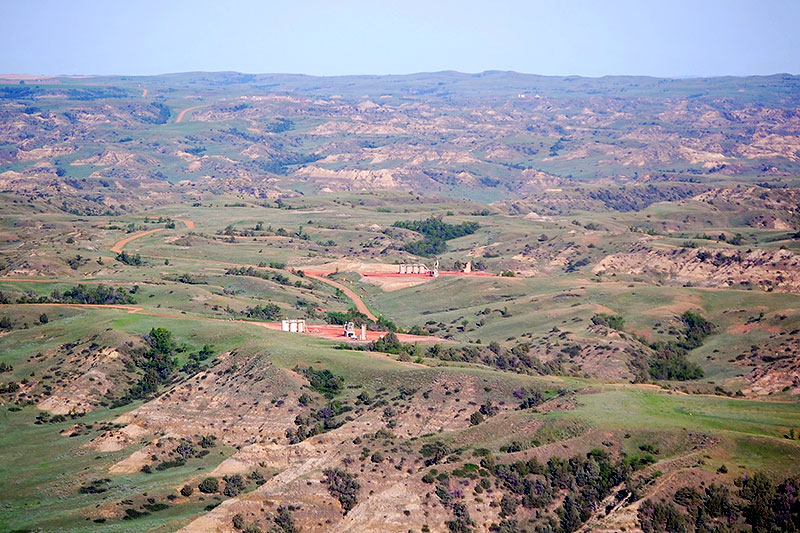 North Dakota’s badlands are a series of buttes, rock outcrops, washouts, and hard wood draws along the banks of the Little Missouri River. The area is characterized by poor soil, steep slopes, high erosion, and shortgrass prairie. 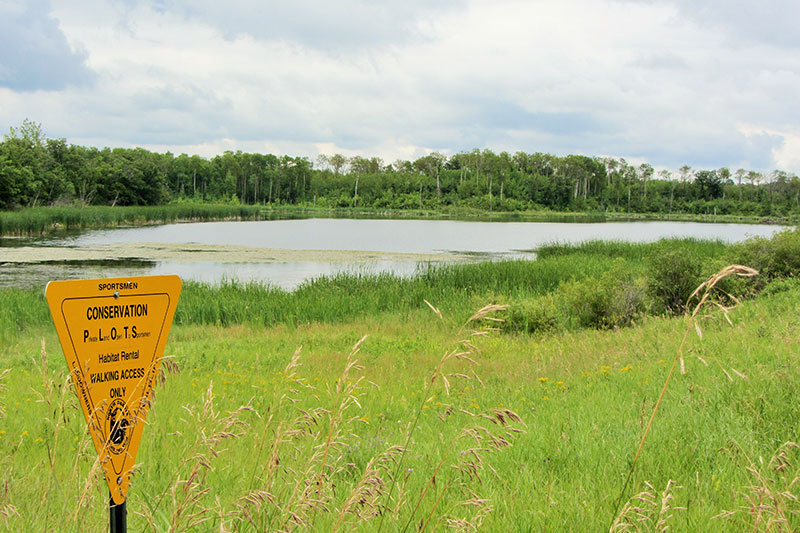 The Turtle Mountains are located in the extreme north central extent of the Drift Prairie. This land form is known as an erosional outlier and covers nearly 1,000 square miles and rises 800 feet above the surrounding landscape.