Initially the Greater Prairie-Chicken was dependent upon tallgrass prairie oak woodland in central North America. As the birds migrated into North Dakota, tallgrass prairie interspersed with cropland became the preferred habitat. Now the presence of woody vegetation may actually reduce nest success. The amount of grassland and wetland in the landscape may positively influence prairie chickens while forest cover and distance from nearest lek are negative influences. Leks are located in areas of bare ground or short cover. Females nest reasonably close to the lek site, 2-5 km, and in relatively dense vegetation. Broods use habitat >25 cm tall, particularly lowlands or areas that contain sedges and usually are wet in the spring. Winter roosting habitat occurs in areas of switchgrass, shelterbelts, or the woody vegetation along cropland edges. Winter cover should be at least 15 cm tall. Food items include leaves, seeds, buds, and insects but these birds rely primarily on agricultural crops for food through the winter.

Key Areas and Conditions for Greater Prairie-chicken in North Dakota

Trees can have negative impacts. Insects and grasshoppers are primary prey for young prairie chickens. Vegetation with multiple forbs contains more insects. Tallgrass prairies may benefit from prescribed fire, which is sometimes removed from management plans. A lack of habitat corridors between outlying populations prevents interconnectivity among populations.

Nests may be parasitized by ring-necked pheasants, or pheasants may be the source of interspecific competition with prairie chickens. Pesticides may reduce insect populations and therefore food availability for broods. Mortality such as birds flying into electric wires, fences, utility wires, and being hit by automobiles occur.

According to the Partners in Flight Landbird Conservation Plan, long-term population trend monitoring such as the Breeding Bird Survey produces imprecise trends for this species. No additional monitoring is needed at this time as the NDGFD will continue in the lead role of obtaining population date on Greater Prairie-Chicken. 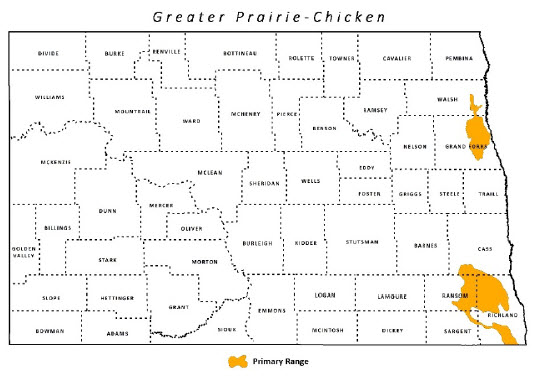