The margin of lakes, ponds, and wetlands, particularly permanent water, are the Canadian’s toads preferred habitat. Considerably more aquatic than most toads, they will swim far into water for refuge. Burrows into the ground using its hind feet.

Key Areas and Conditions for Canadian Toad in North Dakota

Wetland destruction and/or degradation. Lack of vegetation buffer around wetlands in agricultural fields may limit use.

Use of pesticides and herbicides may impact populations locally. Disease such as ranavirus and chytrid fungus may be very detrimental to amphibian populations.

There currently is no monitoring protocol in place. Monitoring tools could include school classes/programs, the general public, or national monitoring initiatives such as ARMI, NAAMP, or PARC. Amphibian monitoring can and should be directed at several species

The Canadian Toad maintains its Level I Species of Conservation Priority ranking. Sampling of amphibians has been conducted as part of number of SWG projects. A larger scale survey is currently underway (T-44-R Amphibian and reptile surveys of southeastern North Dakota). Work towards a monitoring protocol is needed. 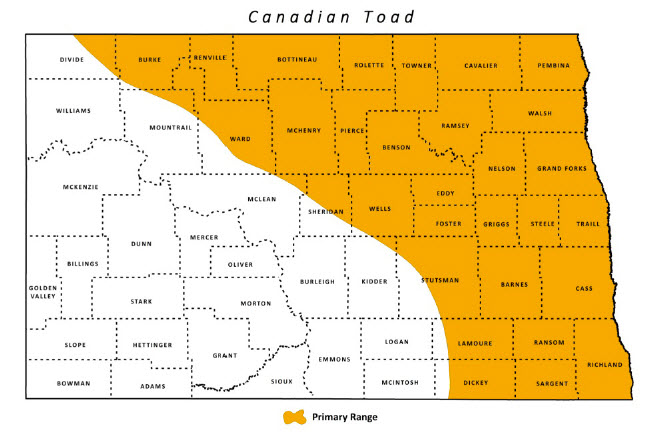