Prairie skinks use open areas with grassy hillsides of soft soil and small, flat rocks. Burrow under stones or other objects on the ground. Skinks may increase in density as field age increases, as many as 200 adults per ha. Feed on grasshoppers, crickets, beetles, caterpillars, and spiders.

The largest population most likely occurs in the extreme southeastern grasslands of North Dakota, although records have come from the northern part of the state. Focus areas where this species occurs include the Sand Deltas and Beach Ridges.

Fragile sand habitat is at risk of destruction and/or degradation. The fragmentation of suitable habitat may hinder interconnectivity of populations, as movement of individual skinks is usually less than 100 meters.

It is unknown what effect pesticides, development, and other disturbance has on populations of prairie skinks.

Future efforts could include visual encounter surveys, but trapping may be the most productive method for determining presence.

Currently no monitoring is taking place. Possible monitoring options could include school classes/programs including universities, the general public through the NDGFD incidental reporting system, or national monitoring initiatives such as PARC. Monitoring should be directed at all herptile species. 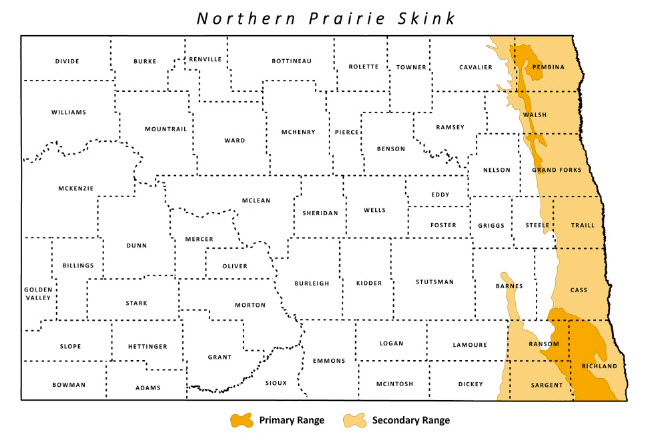