Bald Eagles prefer large rivers and lakes or wetlands bordered with mature stands of trees, or a single large tree, such as cottonwood. Breeding habitat often includes some type of edge and relatively open canopy. The large nests are usually built within the top quarter of tall, living trees, with fewer nests in dead trees. Nests are relatively close to water, typically less than 2 km. Bald Eagles are opportunistic and feed on a variety of fish, mammals, birds, and carrion.

Key Areas and Conditions for Bald Eagles in North Dakota

Development along the Missouri River and other wooded areas could may result in the loss of nesting, roosting, and associated aquatic foraging habitat. The lack of riparian regeneration may limit number of mature cottonwoods in the future. Large shelterbelts are being removed for agricultural expansion.

The use of the pesticide DDT was detrimental to Bald Eagles, causing the thinning of eggshells. Since the ban of DDT, Bald Eagles and many other raptors have rebounded. Eagles are infrequently killed by humans and the illegal trade of eagle parts for Native American purposes is of some concern. Intentional or accidental poisoning is responsible for some mortality. Lead poisoning continues to be reported, indicating eagles may be obtaining lead via a non-waterfowl source. Collisions with vehicles due to eagles eating carrion along roadsides, flying into power lines or electrocution from power lines constitutes a substantial source of mortality. Collisions with wind turbines is of increasing concern. Human activity such as recreational viewing, research activities, noise, agricultural or construction activities, or the mere presence of humans may agitate nesting eagles if the disturbance is close (less than 330 ft.) and/or persistent. This may result in eagles being inadvertently flushed from the nest for extended periods of time and could result in the death of young or nest abandonment.

Since the Bald Eagle is increasing in North Dakota, there are no urgent research needs or additional surveys planned. However, demographic information is unknown such as nest success, food habits, or an analysis of non-traditional nesting habitat. 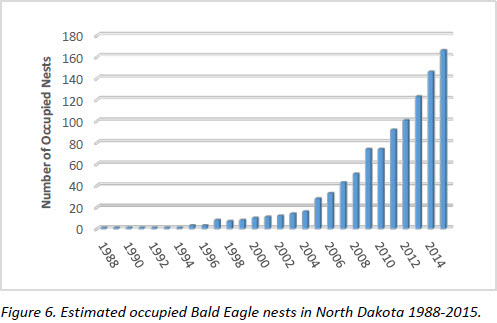 The Bald Eagle remains a Level II Species of Conservation Priority. The number of Bald Eagle nests have increased significantly over the past 10-15 years. The Bald Eagle population is currently secure in North Dakota. 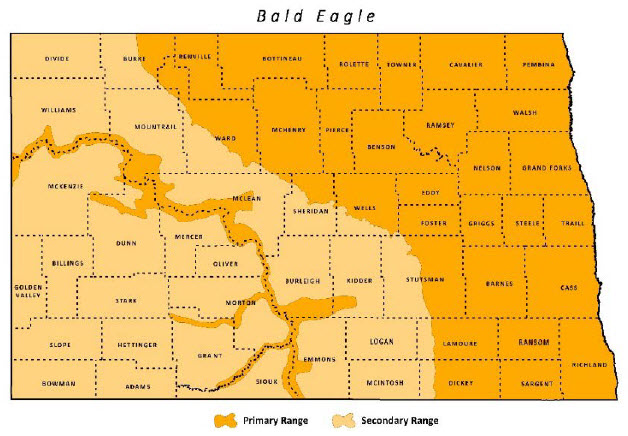