American Bitterns use a variety of freshwater wetlands including seasonal, semi-permanent, temporary, permanent, fens or restored wetlands. They tend to use wetlands which are > 3 ha in size with a large amount of tall, emergent vegetation present such as rushes, sedges, cattails, or common reed. Wetlands dominated by open water and alkali wetlands are generally avoided. Also are likely to occur in wetlands which are not isolated from other wetlands (i.e. prefer wetland complexes). Most commonly nest among dense emergent vegetation over shallow water, 5-20 cm deep. Bitterns will also nest in adjacent uplands of mid to tall (over 30 cm), dense, idle grasslands with moderate litter. The dominant grassland associated species include big bluestem, wheatgrass, smooth brome, switchgrass, and sweet clover. The bittern’s cryptic color helps it blend into surrounding habitat where it patiently waits for prey species of insects, amphibians, small fish, mammals, or crayfish to pass by.

Key Areas and Conditions for American Bitterns in North Dakota

No specific sites have been identified. Appear concentrated in central and southern portion of the Missouri Coteau. Also common in the Turtle Mountains, J. Clark Salyer NWR, and fairly common elsewhere east of the Missouri River in preferred habitat. The presence of this species may vary greatly from year to year dependent on water availability.

Wetland destruction and/or degradation and conversion of upland grassland for agricultural use negatively affect breeding populations. Habitat loss is believed the number one cause for decline of this species. Migration routes of American Bitterns using satellite telemetry data found that many birds (63%) breeding in the central part of North America wintered in the Everglades of Florida, an area impacted by a variety of threats.

Decline in the southern portion of the species range may be linked to declining amphibian populations. The bittern is at the top of the food chain, and its presence is a good indicator of environmental quality. Pesticides and contaminants pose a threat to wetland quality or primary prey species. Some mortality with communication towers. 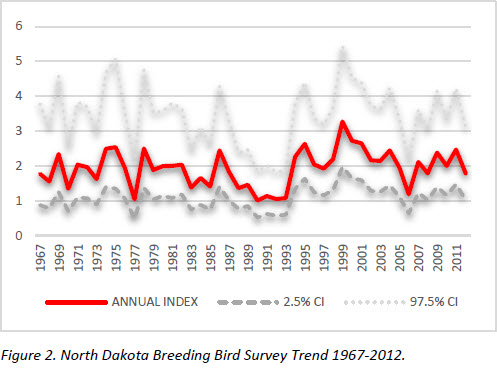 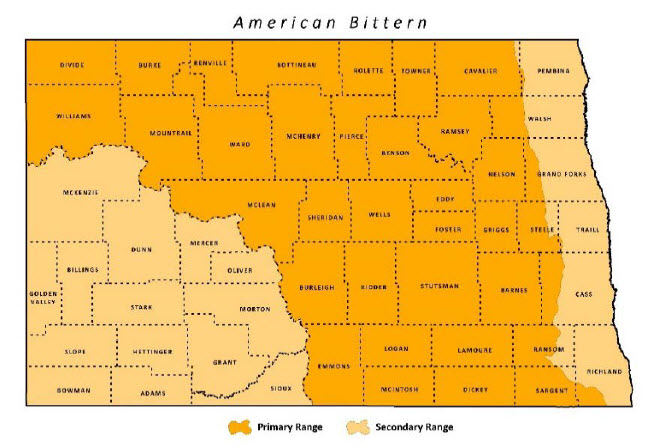