Black Terns use wetland complexes of shallow wetlands, typically greater than 20 ha, with an equal amount of open water and emergent vegetation. Sometimes brackish or alkaline, semi-permanent, marshes and wetlands, lake margins, edges of islands or slow-moving rivers, wet meadows, restored wetlands, and occasionally stock ponds are used. Stable water levels throughout breeding season and abundant nest substrate is important. Large areas of open water used for foraging. Prefers wetlands surrounded by grassland rather than agricultural fields. Nests singly or semicolonially on a floating mat of residual vegetation in sparse to moderately dense emergent vegetation. The nest is 2-20 cm above water that is 0.05-1.2 meters deep. Or, will occasionally nest on abandoned muskrat houses, deserted nests of other wetland birds, mudflats, sandbars, or artificial platforms. Forage for insects over both land and water. Small fish are also consumed.

Key Areas and Conditions for black tern in North Dakota

No specific sites have been identified. Common throughout the Drift Prairie and Missouri Coteau but the presence of this species is highly dependent upon water availability. Wetland complexes are important.

Destruction and/or degradation of wetlands is the greatest threat to Black Terns in North Dakota. Woody vegetation around wetlands negatively affects tern presence.

This species is highly insectivorous and pesticides or contaminants may be an issue. Terns may be tolerant of human activity near nesting colonies, as long as colony is not entered. Mortality from collisions with power lines. Expanding oil and gas development in North Dakota increases risk of oilfield contamination of wetland habitat. 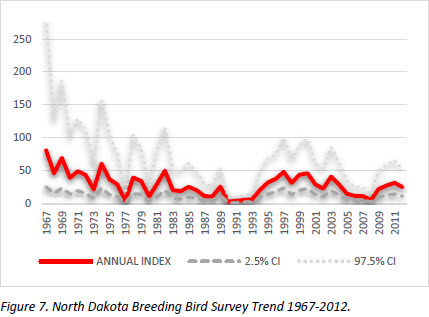 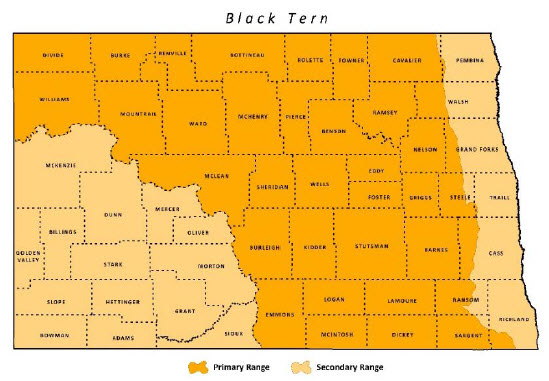