Key Areas and Conditions for Horned Grebe in North Dakota

Horned Grebes are fairly common in the Turtle Mountains and J.Clark Salyer, Upper Souris, and Des Lacs National Wildlife Refuges. The presence of this species varies greatly from year to year dependent on water availability.

Diet consists of primarily small fish (e.g. carp, darters, perch, and sticklebacks), but also aquatic invertebrates. Pollutants such as PCBs, mercury, and pesticides may limit the prey source or the bird itself directly. Collision with power lines over wetlands has been documented. Expanding oil and gas development in North Dakota increases risk of oilfield contamination of wetland habitat. 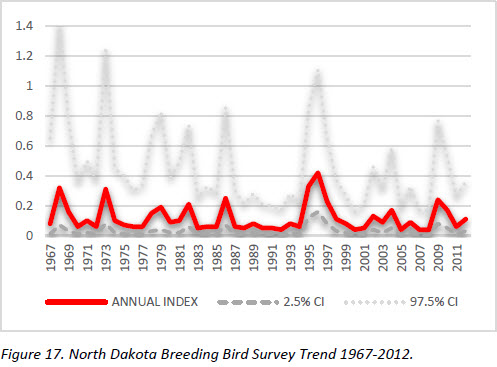 Horned Grebes are under-represented by the BBS roadside survey technique due to the inconspicuous behavior of breeding adults. Nest searches provide the most complete census of breeding birds, but targeted roadside transects before sunset during May or July may be the most efficient. The NPPWCP has identified the basic elements of how a regional/continental waterbird monitoring program should be structured. Waterbird monitoring should follow recommendations of the Waterbird Conservation for the Americas and North American Bird Conservation Initiative ‘Opportunities for Improving Avian Monitoring’. 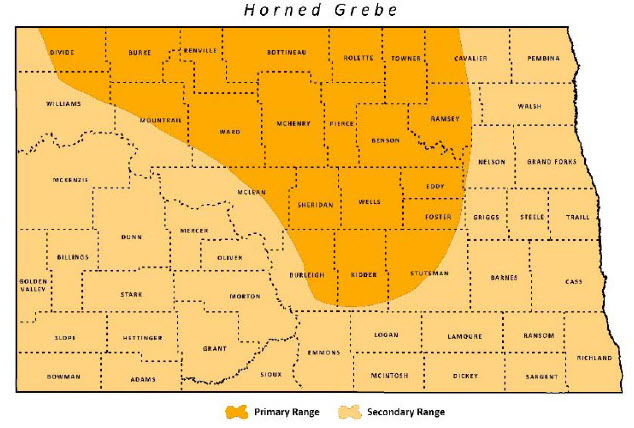