For breeding, Long-billed Curlews use expansive, open, level to gently rolling or sloping grasslands of short vegetation such as short-grass and grazed mixed-grass prairie. Areas where the majority of the vegetation height is less than 10 cm are preferred. Proximity to water is possibly an important factor in habitat selection. Nest in the dry uplands near wet areas such as wet meadows, which are used for feeding, loafing, and by young fledglings. Forage in grassland, cultivated fields, stubble fields, and black-tailed prairie dog colonies for terrestrial invertebrates such as grasshoppers and beetles. Nests are usually located near cowpies or other conspicuous objects for concealment and are often on hummocks for improved visibility.

Key Areas and Conditions for Long-billed Curlew in North Dakota

Destruction and/or degradation of grassland habitat is the greatest threat to Long-billed Curlews in North Dakota.

Curlews are sensitive to disturbance from human activities, especially during the nesting and brood-rearing periods. Abandonment of breeding sites due to human disturbance has been documented. Expanding oil and gas development in North Dakota may impact Long-billed Curlews.

Few BBS routes in North Dakota intersect with Long-billed Curlew range. The project described above included recommendations for long-term monitoring of Long-billed Curlews in North Dakota. Statewide and intensive census routes were established and may be revisited in future years. A shorebird monitoring plan should follow The International Shorebird Survey (ISS) Program for Regional and International Shorebird Monitoring (PRISM) and “Guidance for Developing and Implementing Effective Shorebird Surveys.”

The Long-billed Curlew remains a Level I Species of Conservation Priority. The Natural Resources Conservation Service has implemented Greater Sage-Grouse habitat restoration programs within areas of the Long-billed Curlew breeding range. The curlew is benefiting from these conservation efforts. The American Bird Conservancy is focusing no shortgrass prairie grassland conservation, including implementing fencing and native seed plantings on private lands in southwest North Dakota. 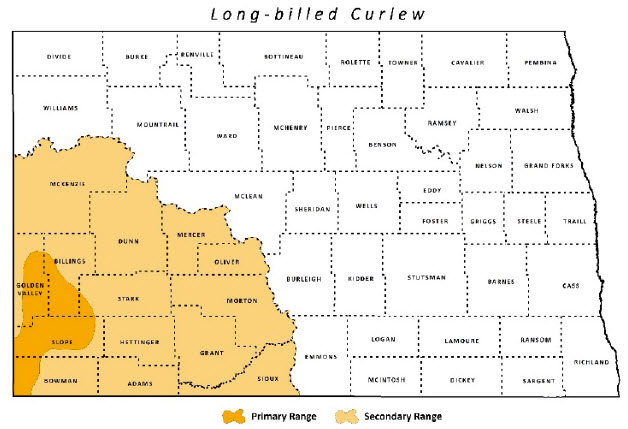