Pelicans nest in colonies on barren islands or peninsulas in large lakes or sometimes on rivers. Island substrate of gravel, sand, or soil is preferred, with little to no vegetation. Commonly nest with other colonial birds such as double-crested cormorant, gulls and terns. The areas on which they nest are often greater than50 km from where they forage. Primary prey items include fish (e.g. carp, chubs, shiners, and catfish), salamanders, frogs, or crayfish. Foraging occurs in shallow waters, 0.3-2.5 m., of marshes, lakes, and rivers. Sovada et al. 2013 found selection against temporary and seasonal wetlands and rivers for foraging. It is only during times of spawning that game fish species are suspected to be taken due to the pelican’s shallow water foraging habit.

Key Areas and Conditions for White Pelicans in North Dakota

The destruction or degradation of key foraging wetlands and associated prey species could affect pelican populations.

The recent outbreak of West Nile virus (WNV) in North America may have negatively affected the pelican population in North Dakota. In 2003, half of the pre-fledged pelicans died from WNV. Mortality of pelican chicks from WNV appears to be an additive mortality factor. Other diseases that could potentially impact large colonies include Newcastle’s disease and avian botulism. Perceived competition for fish resources with sport and commercial fisheries. Primary mammalian predators include fox and coyote, with coyote harassment being a potential cause of the recent pelican abandonment. Human disturbance or intrusion of the nesting colonies during the courtship period and initial incubation may cause abandonment. Expanding oil and gas development in North Dakota increases risk of oilfield contamination of wetland habitat. Some mortality from collisions with power lines and wind turbines.

Continue to monitor the influence of WNV and other diseases on the population and colonies. 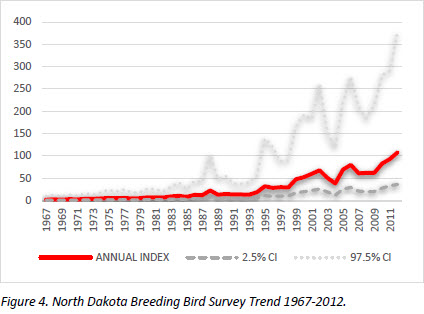 The American White Pelican was moved from a Level I to a Level II Species of Conservation Priority due to stable population and increasing breeding range. White pelicans are establishing small but new breeding colonies in North Dakota. Efforts to identify additional breeding colonies are underway. Although new colonies are forming, the white pelican remains at-risk primarily due to the overall limited number of colonies in North America (less than 50). Several State Wildlife Grant Projects (T2-9-R, T-18-R, T-27-HM) have contributed to habitat enhancement of wetlands for white pelicans 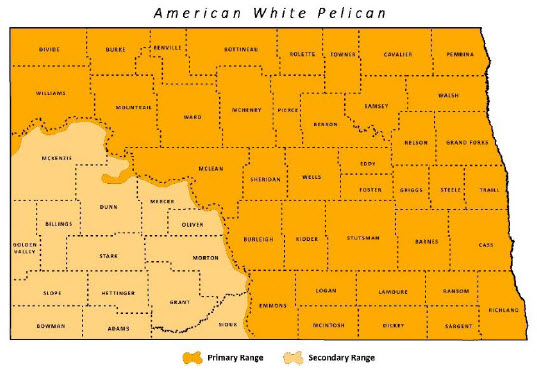