Yellow Rails prefer fens or wet meadows dominated by sedges, grasses, rushes, and bulrushes in fresh and brackish wetlands. Wetland water depth of typically 0-46 cm. Rail presence is often associated with a high percentage of emergent vegetation. Nest under a canopy of vegetation in areas with standing water or saturated ground. Have been observed using wetlands as small as 0.5 ha, but will use wetlands up to 1,000 ha. Primary food includes snails, aquatic insects, and seeds.

Key Areas and Conditions for Yellow Rail in North Dakota

No specific sites have been identified. Yellow Rails are primarily found in the northern half of North Dakota. Possibly established populations in southwestern Benson County. The presence of this species may vary greatly from year to year depending on water availability.

Wetland destruction and/or degradation and conversion of upland Fens are rare and extremely vulnerable in North Dakota. Processes used to alter fens to create deeper, more permanent water are a threat to natural fens. Drainage of wetlands is another concern. The wetlands of North Dakota are extremely dynamic in nature. Fens that hold water one year may be dry the next. Invasion of hybrid cattails into these wetlands with little or no cattails is a concern.

Pesticide runoff from agricultural practices may affect wetland communities. Human disturbance from wildlife observers entering Yellow Rail habitat to get a glimpse of the rare birds could cause abandonment or destruction of nests. Yellow Rails may killed from machinery during mowing or haying. Mortality from collisions with communication towers and power lines. Expanding oil and gas development in North Dakota increases risk of oilfield contamination of wetland habitat. 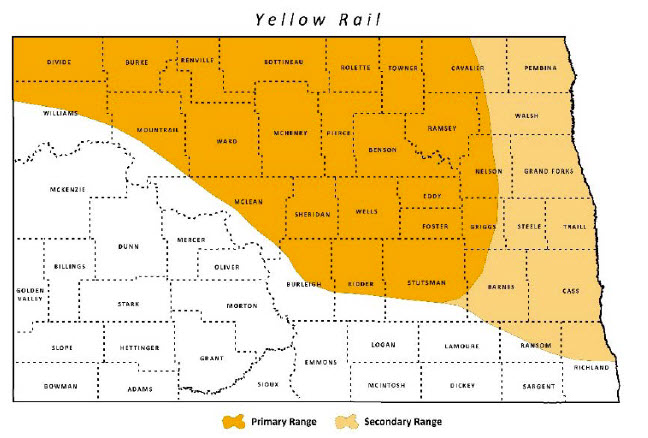