In North Dakota, cuckoos are most likely present in brushy margins or openings of woodlands, and thickets of small trees or shrubs on the prairie. Also uses riparian areas, shelterbelts, and wooded areas of towns and farmsteads. Nest in trees or thick brush usually 1-2 meters above the ground. Primarily insectivorous, feeding on large caterpillars, beetles, grasshoppers, crickets, butterflies, and occasionally fruits. Cuckoos will even readily consume noxious species such as tent caterpillars. May be area sensitive, requiring larger tracts (at least 1 ha) of forest habitat.

Key Areas and Conditions for Black-billed Cuckoos in North Dakota

Destruction and/or degradation of native riparian habitat. Development in wooded areas along major rivers may be limiting cuckoo nesting habitat. Overgrazing of woody draws and other woodlands affects the vegetative structure and composition.

Black-billed Cuckoos rely heavily on caterpillars for food and can be especially gregarious during caterpillar outbreaks. Insecticides will reduce prey availability. Some mortality from collisions with structures and communication towers, probably in part due to nocturnal migration behavior. 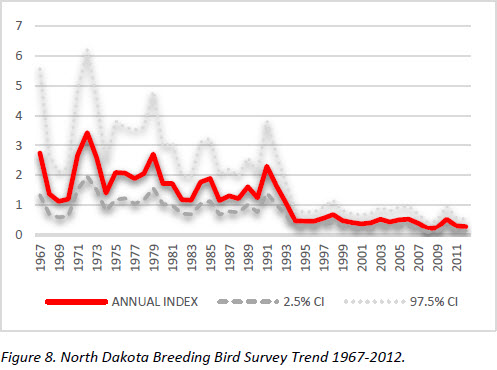 According to the Partners in Flight Landbird Conservation Plan, long-term population trend monitoring such as the Breeding Bird Survey is generally considered adequate, but may not account for some issues (e.g. bias). Ensuring all BBS routes are conducted annually is priority. A monitoring plan specific to Black-billed Cuckoos is not needed at this time, however, the NDGF will continue to monitor BBS trends and the species status.

The Black-billed Cuckoo remains a Level I Species of Conservation Priority. Several State Wildlife Grant Projects (T2-1-D, T-20-D, and T-42-R) have contributed to habitat enhancement of riparian areas for Black-billed Cuckoo and other woodland dependent birds. 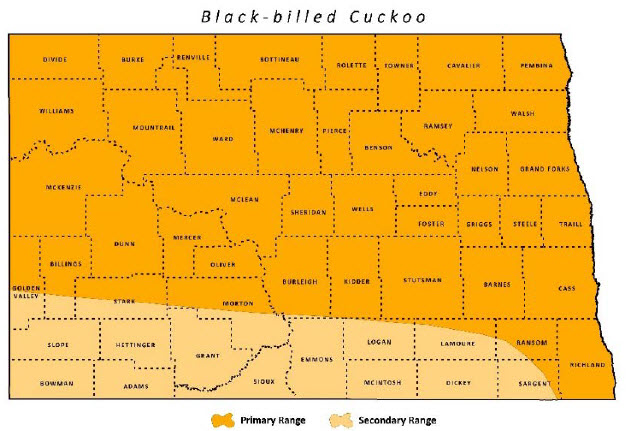