The Value of PLOTS Beyond Fall

And that’s for good reason, as the popular walk-in access program, marked by unmistakable yellow signs and visited by an uncountable number of hunters, has been on North Dakota’s landscape for more than 20 years. This year, about 800,000 are available to hunters. 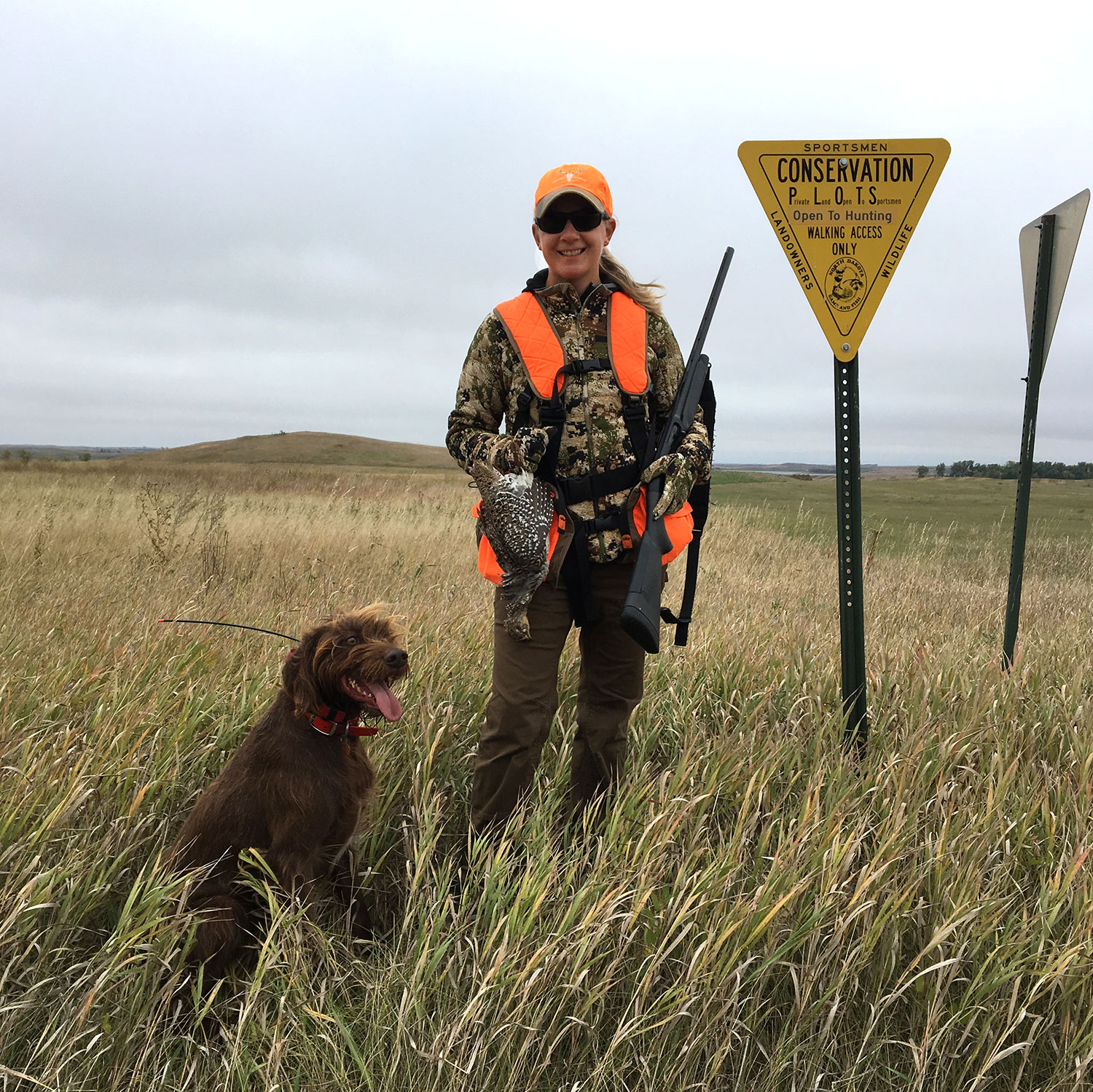 Sandra Johnson, Bismarck, with her bird dog, Luna, and a sharp-tailed grouse taken from a PLOTS tract.

“A lot of people associate PLOTS with fall and fall hunting because that’s what these lands are largely used for,” said Kevin Kading, Game and Fish Department private land section leader. “I’m guessing that the first time some people ever step foot on a PLOTS tract is during the hunting season.”

Yet, while these lands garner the bulk of the attention when the days cool and leaves turn, PLOTS acres are beneficial to wildlife during other seasons.

“At this time of year, a lot of wildlife production is happening on PLOTS and other places with quality habitat,” Kading said in June while standing on a PLOTS tract in Emmons County. “Any grassland component on PLOTS or elsewhere is important for grassland dependent birds, grassland nesting birds from ducks, to pheasants, to sharp-tailed grouse, to Western meadowlarks and everything in between.”

Kading said all the birds mentioned, from the upland game birds hunters pursue, to those that color the prairie with their presence, have different habitat needs, which means, for example, different heights and composition of grasses.

“The habitat at this time of year, from the old growth grasses from last year, to the new grasses coming in now, are all vitally important for these birds to be able to pull off successful broods,” he said. “If you boil it all down, these are grassland dependent birds and North Dakota is a prairie state.”

Kading said the grasslands found on PLOTS and across the landscape need to be managed to provide the proper benefits to wildlife.

“There was a time when we thought that these lands should just be left idle for 10, 20 years, but that’s just not the case,” he said. “Having some disturbance out there, some frequent management to these lands is beneficial. Whether that’s haying, grazing, mowing, burning ... Even going out on planted grassland like CRP or a PLOTS tract and disking it lightly to kind of rejuvenate the grass and get a forward response again is beneficial.

“Sometimes it might look to a hunter who is maybe not aware what is happening out there that it’s destroying habitat, but it’s actually a longer-term benefit,” Kading added. “If you come out in April or May and there is a prescribed burn going on you might only see a loss of habitat for one year, but not consider the benefits to the grass stand overall.” 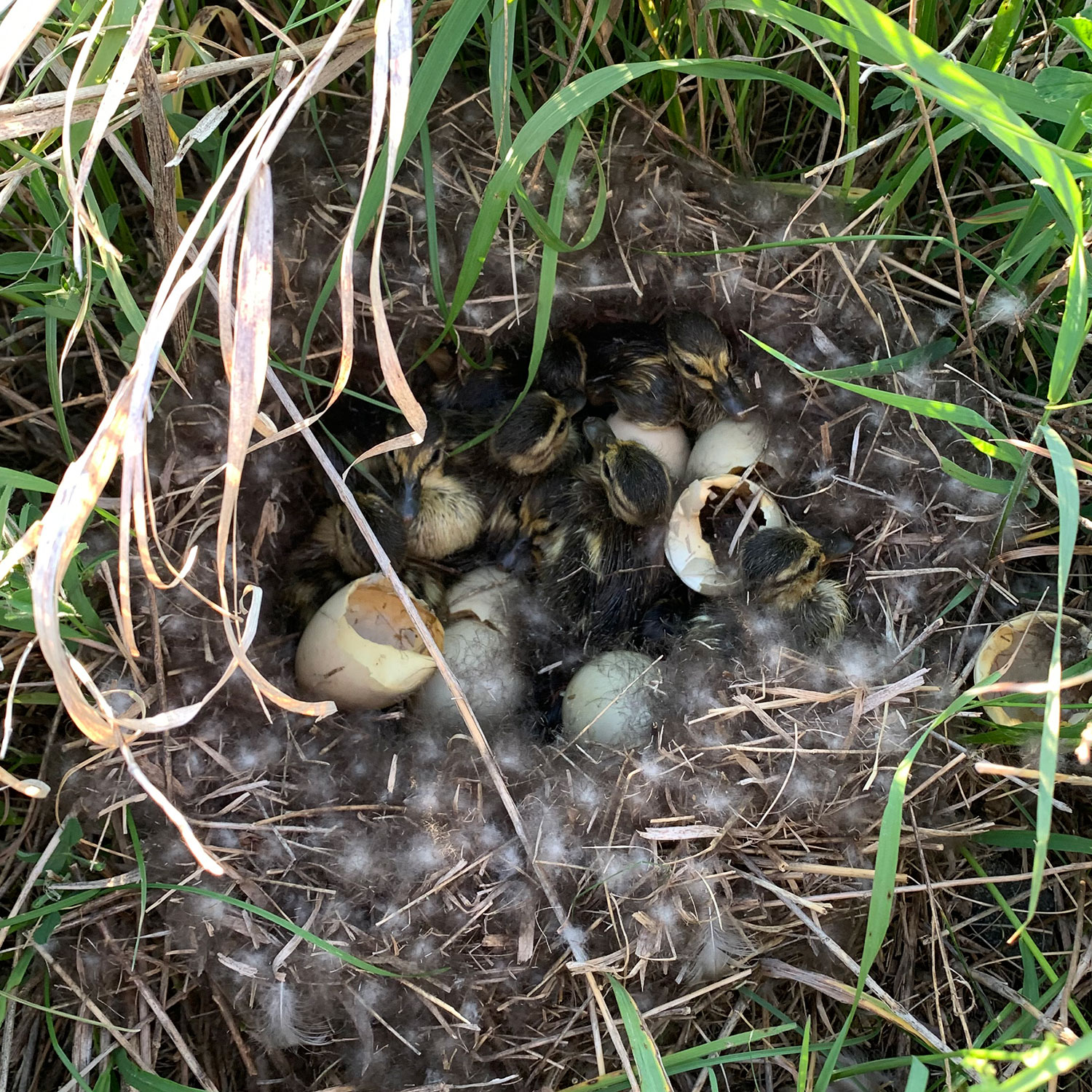 Ducks, upland birds and many other bird species benefit from the nesting cover found on PLOTS lands in the spring and summer months.

Much is made, and for good reason, about having good winter habitat on the landscape because it’s during North Dakota’s leanest months when animals are most stressed. Yet, Kading and other wildlife biologists are quick to praise the importance of quality grassland habitat in the spring and summer months for birds, such as pheasants, which garner the most attention from hunters.

“Not all pheasants make it through winter, but if enough do and you’ve got good nesting cover on the landscape for them come spring, they’ll rebound very quickly,” he said. “Anywhere from as early as mid-April to late August, birds are on their nests and raising broods. How well they pull it off this time of the year really drives the population.”

Quality habitat on PLOTS and across the landscape is not only important for grassland nesting birds, but also whitetail deer, the state’s most harvested big game animal.

Bill Jensen, Game and Fish Department big game management biologist, who was with Kading on the Emmons County PLOTS tract in June, said at that time of year, the home range of a whitetail doe is about 1.5 miles, but her fawn is confined to about 100 acres of less. So, everything a fawn needs to survive – quality, heightening habitat – needs to be available in that 100 acres.

“For the doe, she needs water and high-quality food because this is an energetically demanding time for her because she is nursing so much,” Jensen said. “Because the doe needs to drink at least once a day within her home range, these small wetlands on PLOTS are just as important for deer as ducks.

“The fawn needs good hiding cover from predators, which usually consists of low vegetation of at least 18 inches in height,” he added. “They also like over-story vegetation like shrubs and trees. Usually, they want or need about 50-75% of that home range in a stable bedding cover.”

According to research, Jensen said the peak of the fawning season in North Dakota is about June 6. Within two weeks of that date, 75% of the fawns are born and 90% percent within four weeks.

“Without good, quality habitat fawns are subjected to higher predation,” he said. “If they’re confined to narrow tree rows, those fawns are easily found and killed.”

And the same goes for pheasants as their nest are easily found and destroyed.

The North Dakota Game and Fish Department’s Private Land Open To Sportsmen Guide for 2020 is available online. In addition, the free printed PLOTS guides are available at most license vendors and other locations throughout the state.

The guide features about 800,000 PLOTS acres. Because the guide is printed in mid-August, some PLOTS tracts highlighted in the guide may have been removed from the program since the time of printing. There will also be some PLOTS tracts where the habitat and condition of the tract will have changed significantly. Conversely, Game and Fish may have added new tracts to the program after the guide went to press.

To minimize possible confusion, Game and Fish will update PLOTS map sheets weekly on its website.

The PLOTS guide features maps highlighting these walk-in areas, identified in the field by inverted triangular yellow signs, as well as other public lands.

The guides are not available to mail, so hunters will have to pick one up at a local vendor or print individual maps from the website.