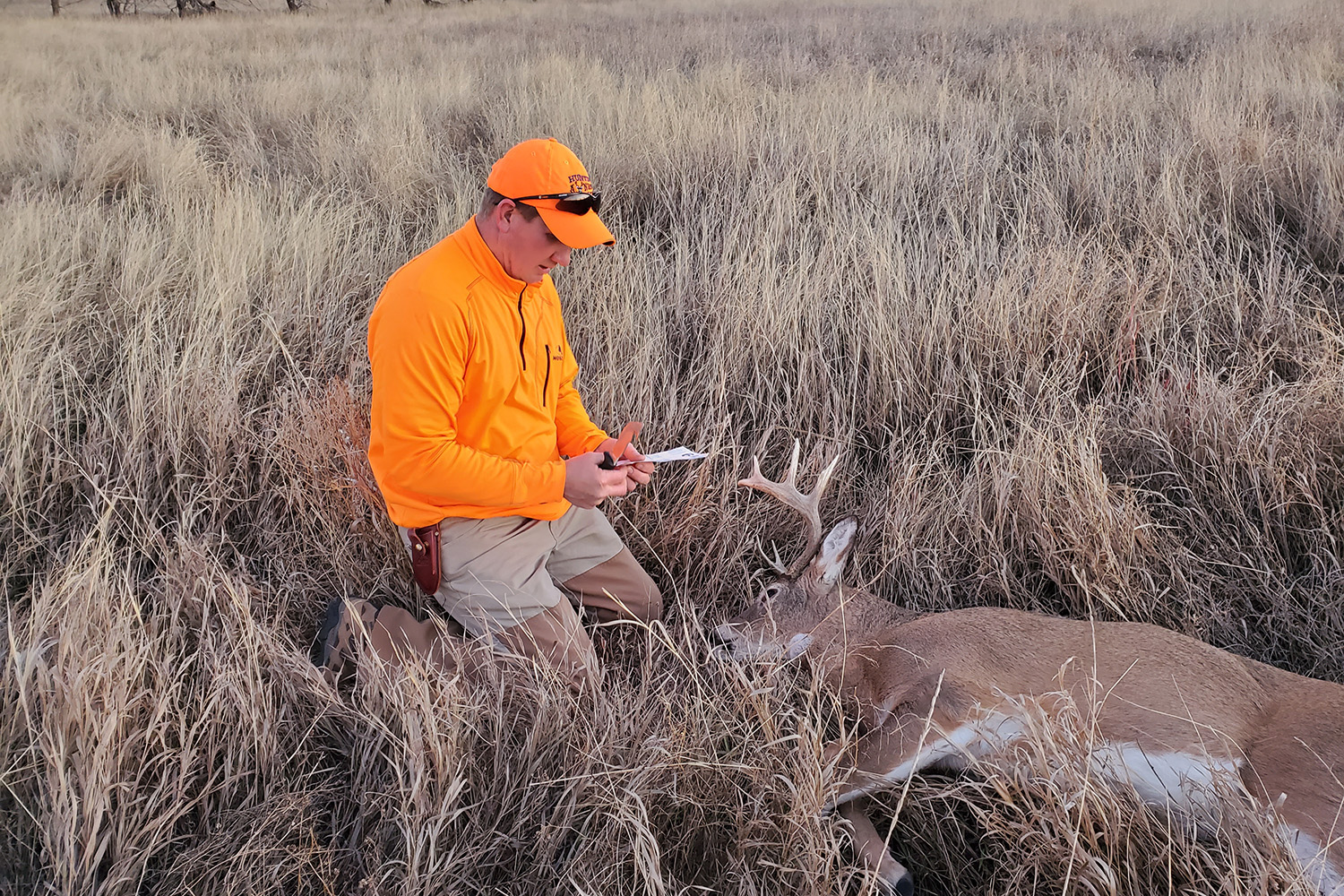 A total of 57,949 North Dakota deer hunters took approximately 37,250 deer during the 2019 deer gun hunting season, according to a post-season survey conducted by the state Game and Fish Department.

Game and Fish made available 65,500 deer gun licenses last year. Overall hunter success was 64%, with each hunter spending an average of 4.3 days in the field.

Hunter success for antlered white-tailed deer was 64%, and antlerless whitetail was 58%.

Mule deer buck success was 78%, and antlerless mule deer was 79%.

For 2020, 69,050 deer gun licenses are available, up 3,550 from last year. In addition to harvest rates and winter aerial surveys, Game and Fish staff monitor other population indices to determine license numbers, including depredation reports, hunter observations, input at advisory board meetings, and comments from the public, landowners and department field staff.

Boat owners are reminded that children ages 12-15 who want to operate a boat or personal watercraft alone this summer must first take the state’s boating basics course.

State law requires youngsters ages 12-15 to pass the course before they operate a boat or personal watercraft with at least a 10-horsepower motor. In addition, some insurance companies give adult boat owners who pass the course a discount on boat insurance.

The course is available for home-study from the North Dakota Game and Fish Department’s Bismarck office. Two commercial providers also offer the course online, and links to those sites are found on the Department’s website at gf.nd.gov.

While the home-study course is free, there is a fee for the online course. The online provider charges for the course, not the Game and Fish Department.

Upon completion of the online test, students can print out a temporary certification card, and within 10 days a permanent card will be mailed.

If you see a black bear in North Dakota, the state Game and Fish Department wants to know about it.

“Black bears are quite conspicuous and rarely mistaken for other species,” said Stephanie Tucker, Department game management section leader. “Reports from the public are our primary means to keep track of black bears, so the information is valuable.”

Game and Fish confirms 12-15 black bears in the state each year, Tucker said, with most documented in the northern or eastern portions of the state. However, she said they have the potential to turn up anywhere.

Anyone who observes a black bear is asked to report it online.

“It’s important to keep your distance, but if you have an opportunity to take a photo, we ask that you upload it with your online observation report,” Tucker said. 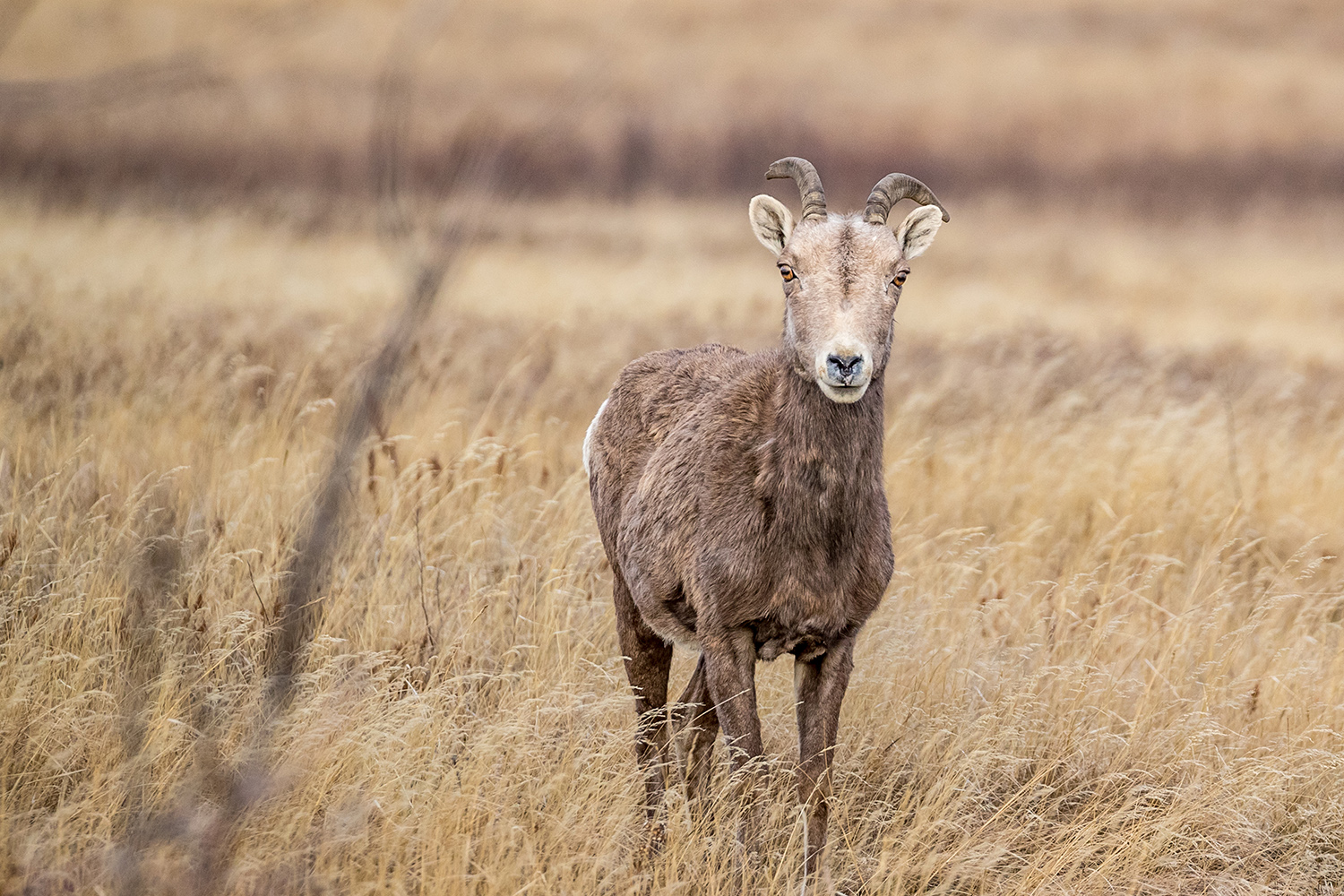 The North Dakota Game and Fish Department’s 2019 bighorn sheep survey, completed by recounting lambs in March, revealed a minimum of 290 bighorn sheep in western North Dakota, up 2% from 2018 and 3% above the five-year average.

Brett Wiedmann, Department big game biologist, was pleased to see another increase in the survey, following a decline in 2017.

“The increase in the 2019 count reflects lessening effects of bacterial pneumonia that was detected in 2014,” Wiedmann said.

“The total count of adult rams unfortunately declined for a fourth consecutive year in 2019, but adult ewes remained near record numbers,” Wiedmann said. “Most encouraging was the significant increase in the lamb count and recruitment rate following record lows in 2016 and 2017.”

Game and Fish biologists count and classify all bighorn sheep in late summer, and then recount lambs the following March, as they approach one year of age, to determine recruitment.

“Fortunately, annual survival rates of adult bighorns are very high and similar to those prior to the die-off, and lamb survival continues to improve, which could indicate the population is becoming somewhat resilient to the deadly pathogens first observed in 2014,” Wiedmann said. “The deadly pathogen, Mycoplasma ovipneumoniae, has not been detected the last two years in most of the northern herds via annual disease testing, and none are currently showing symptoms of pneumonia. However, the next few years will be important in determining if the state’s population shows signs of recovering from the disease outbreak, or if the pathogens are likely to persist and cause a long-term population decline.”

A bighorn sheep hunting season is tentatively scheduled to open in 2020, unless there is a recurrence of significant adult mortality from bacterial pneumonia. The status of the bighorn sheep season will be determined September 1, after the summer population survey is completed.

Game and Fish issued five licenses in 2019 and all hunters were successful in harvesting a ram. 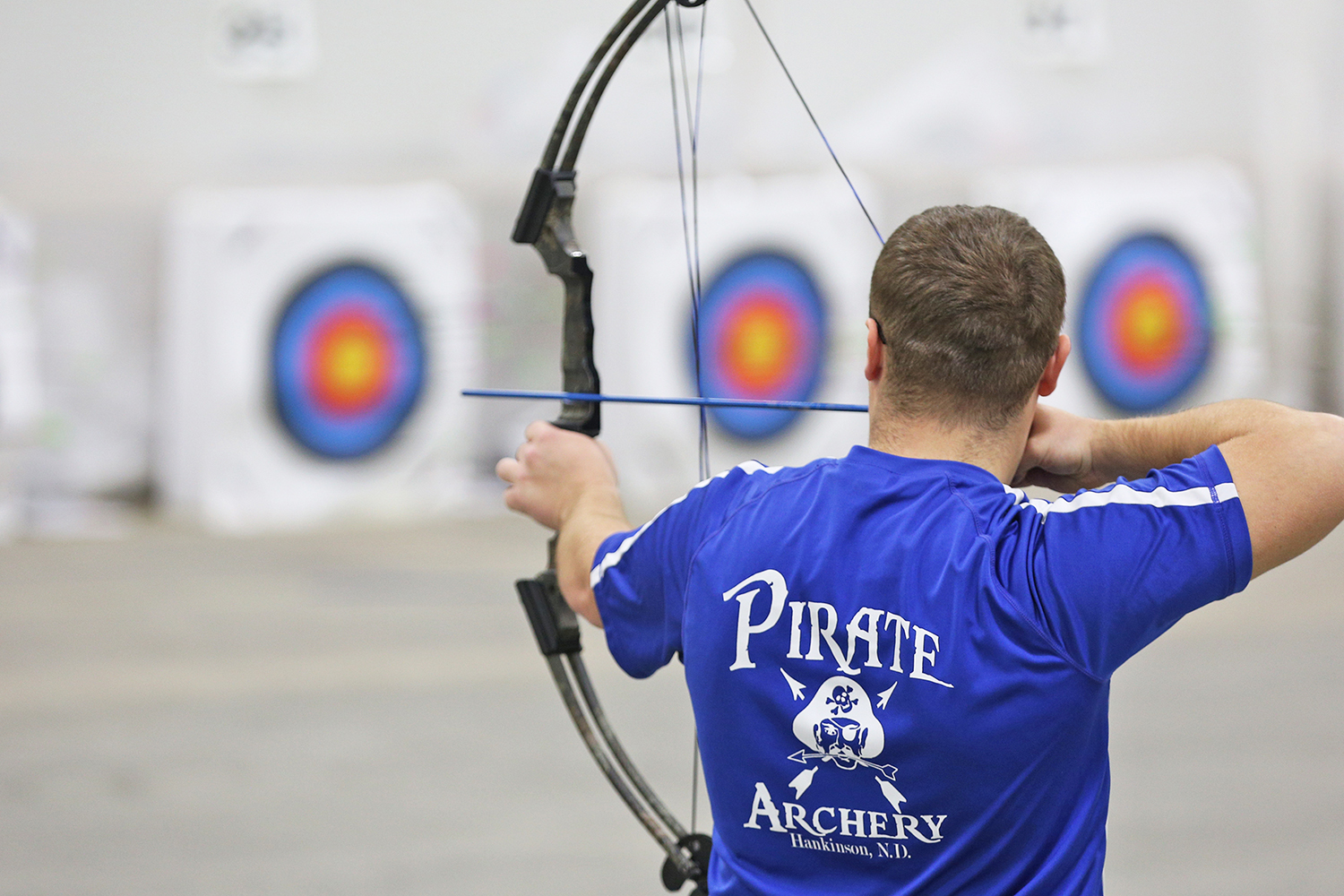 Even though the 2020 North Dakota National Archery in the Schools Program state tournament in-person event was canceled due to the coronavirus pandemic, organizers had a plan in place to recognize archers based on earlier results from the school year.

State NASP coordinator Jeff Long said he always had a backup plan in place in case the live tournament was canceled because of a weather event. And in that situation, the state tournament would become a virtual tournament.

“Normally, a virtual tournament would consist of schools conducting tournaments back in their gyms and the coach would enter the scores online,” Long said. “The schools would normally be required to pair up so at least two schools were actually competing together. However, the unique thing about this cancellation was most, if not all schools, would not have been able to conduct the tournament back in their communities either, because of social distancing guidelines.”

Therefore, Long said in lieu of conducting an actual shooting event, coaches were allowed to select any score shot by an individual at a previously conducted local NASP tournament and enter those scores for their student archers.

“There were more than 25 local bull's-eye and 3-D tournaments completed in North Dakota before schools and facilities were shut down,” Long said. “The coaches were given a window of time to enter their scores, and then we verified the results. We felt it was important to recognize the students and instructors for the time and effort they put into this program.”

This year’s national tournaments scheduled in Louisville, Kentucky and Salt Lake City, Utah have been canceled.

The North Dakota Youth Archery Advisory Council contributed $20,000 in college scholarships to the top five overall scorers in both boys and girls divisions.

In addition, archers were scored in a NASP 3-D Challenge tournament.

The North Dakota Game and Fish Department recently paid more than $700,000 in taxes to counties in which the Department owns or leases land. The 2019 in-lieu-of-tax payments are the same as property taxes paid by private landowners.

The Game and Fish Department manages more than 200,000 acres for wildlife habitat and public hunting in 51 counties. The Department does not own or manage any land in Traill or Renville counties.

ollowing is a list of counties and the tax payments they received. 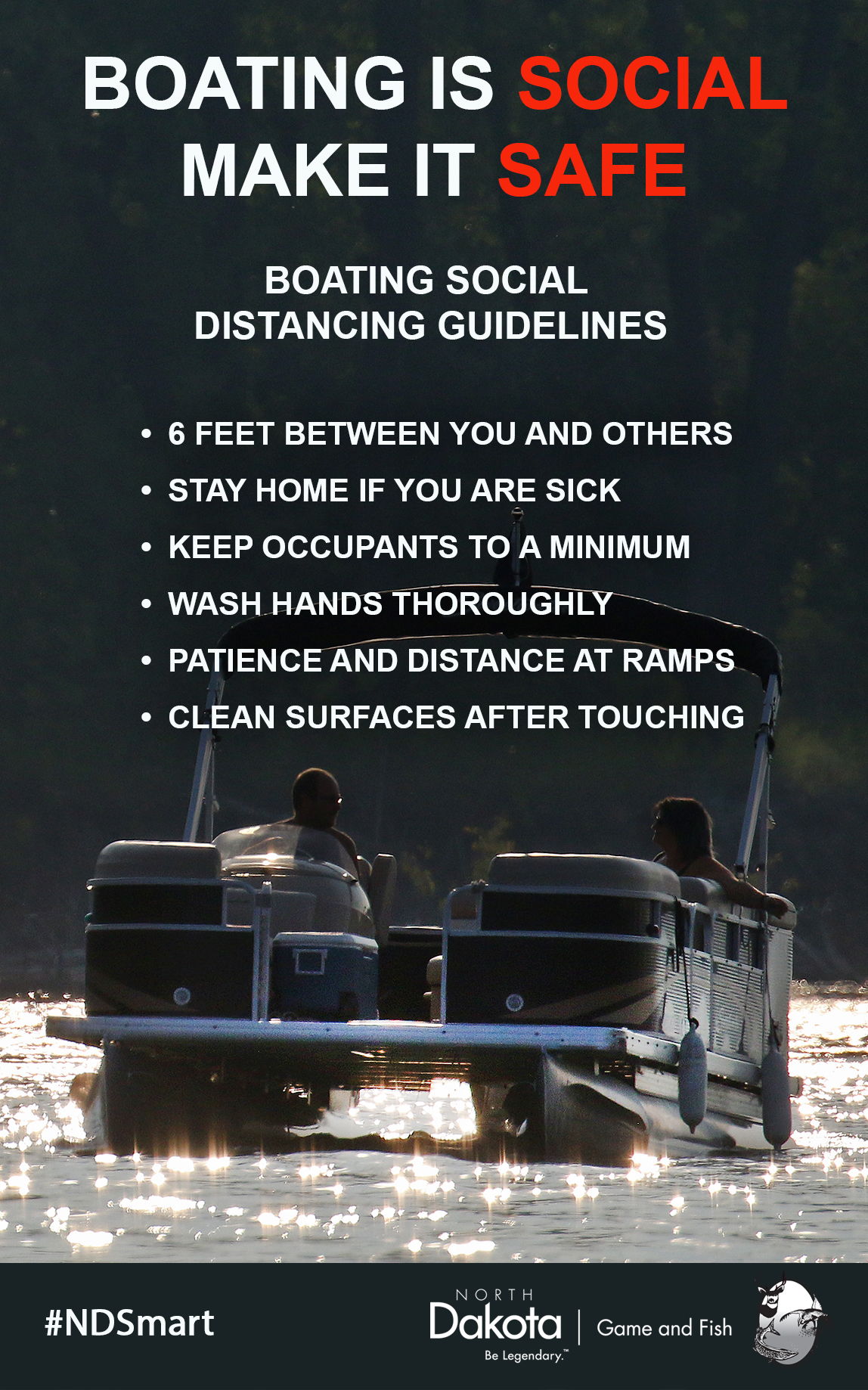 Regardless of how safe and cautious boaters are on the water, accidents happen.

If a boating accident involves injury, death or disappearance of a person, an accident report must be filled out and sent to the North Dakota Game and Fish Department within 48 hours of the occurrence.

If property damage exceeds $2,000, but no deaths or injuries occur, a boat operator has five days to file a report. A boat accident form is available at the Game and Fish Department website, gf.nd.gov, at any Game and Fish office or by contacting a local game warden.

Jackie Lundstrom, Game and Fish Department enforcement operations supervisor, adds that in addition to wearing a life jacket, boaters are reminded to practice social distancing during these times of uncertainty.

The North Dakota Game and Fish Department has announced the winners of this year's Earth Day patch contest.

Winners in the three age categories were Kenzley Hausauer of Halliday (6-9), Allison Gudmundson of Mountain (10-13), and Rowan Bushnell of Cartwright (14-18). Gudmundson’s design was chosen as the contest winner.

Each year, the Game and Fish Department sponsors a contest to celebrate Earth Day, recognized April 22, for students ages 6-18 to design a North Dakota Earth Day Patch. Groups participating in cleaning up publicly owned or managed lands in April and May receive a specifically designed conservation patch.

This year’s cleanup projects were canceled due to the coronavirus pandemic.

The North Dakota Game and Fish Department has received $12.8 million in 2020 as its share of excise taxes paid by America's recreational shooters, hunters, anglers and boaters. Altogether, 56 state and territorial fish and wildlife agencies shared more than $971 million.

The funding is used by Game and Fish to support conservation programs such as fish and wildlife monitoring, habitat improvement, research and education. The money also helps pay for hunter and aquatic education, and fish and wildlife-related recreation projects. Federal assistance funds pay for up to 75% of the cost of each project, while the state contributes at least 25% from nonfederal sources. Game and Fish is a special fund agency in North Dakota, as it receives no state general fund dollars.

The federal funds are apportioned by a formula under two assistance programs – Wildlife Restoration and Sport Fish Restoration. The total 2020 Wildlife Restoration apportionment for all state and territorial agencies is more than $601 million. Sport Fish Restoration support for 2020 totals nearly $370 million. The funds are allocated to the states by a formula based 50% on the amount of land area of the state relative to the rest of the states, and 50% based on the number of hunting license holders in a state relative to other states.