Believe it or not, August is here meaning fall is just around the corner with early goose season opening in just two short weeks. But with temperatures still climbing into the triple digits some days, it’s hard not to favor time spent on the water. And fishing reports can’t get much better for both our popular big lakes like Sakakawea and Devils, and our district fisheries.

Plus, there’s still time to tackle the 2022 North Dakota Fish Challenge. One angler even completed the challenge all in one day!

While I’m familiar with the allure of the tasty walleye, participating in this year’s challenge brought my husband and me to one new lake, inspired a new recipe and contributed to four unique experiences on North Dakota waters. And for the record, I’m in the challenge lead because he’s yet to catch a yellow perch and his time is waning, I’ve got my eyes on the ice cream prize already. 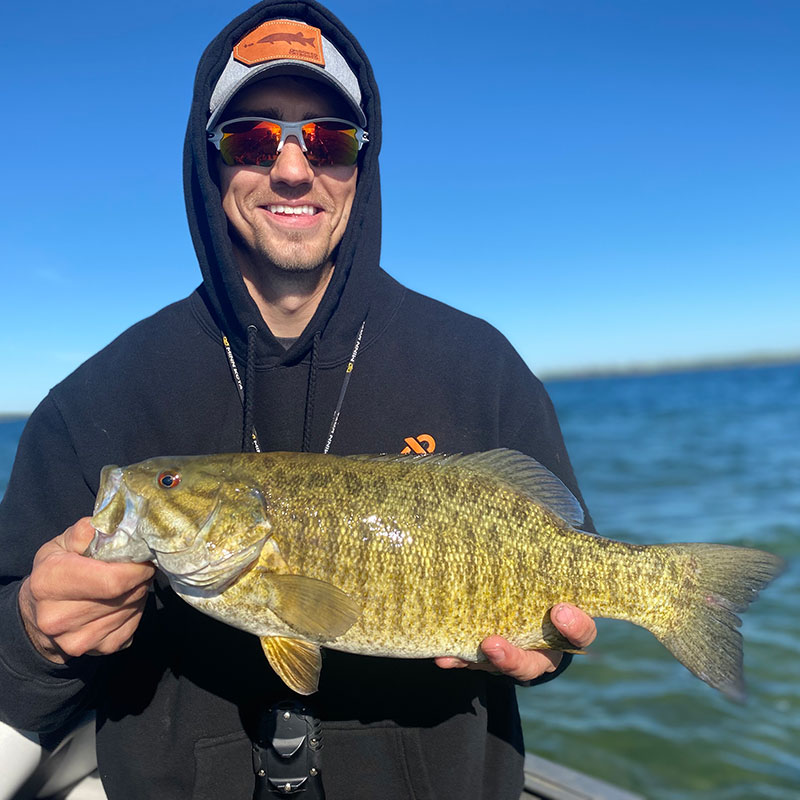 The smallmouth bass was probably the most typical outing for us in our pursuit of the four challenge species.

Once turkey season has faded, we switch gears to the water and usually start with feisty, spawning smallies. We have a go-to smaller lake that often provides excellent sized fish and a less risky opportunity to get the boat out for the first time of the year, but it’s tough to pass up the quantity of smallmouth on Lake Audubon that certainly aren’t shabby in size either.

We always devote a few days this time of year to slowly working shallow sunken islands with jigs and often sight fishing these bass off their nests.

While my first and largest smallmouth of the year came on May 28, water temperatures were still a little behind and spawning wasn’t in full swing. It wasn’t until almost mid-June that we had the kind of day with netting chaos and beat up thumbs that make this sportfish so addicting. 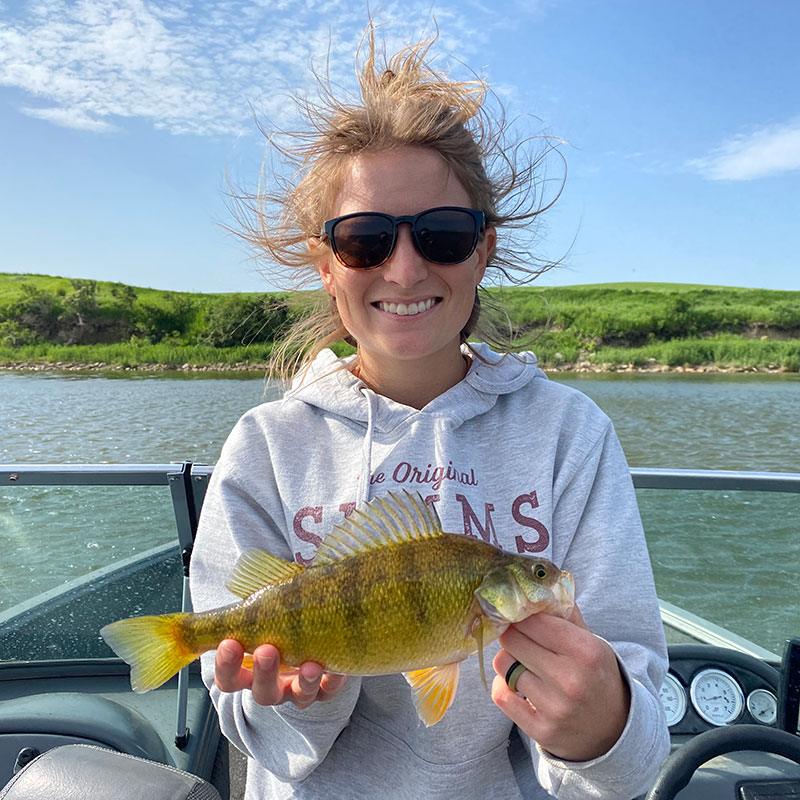 Perch was definitely the species I was most worried about checking off, and I had the OWLS pond at the Bismarck office as a backup plan but was hoping to find success elsewhere.

My husband and I had been eyeing Stober lake, a district fishery just north of Goodrich, for its walleye potential and it also happened to hold a fair number of nice sized perch. We figured if we pulled spinners with live bait we should have a chance at either.

What we didn’t factor in was the 30mph sustained south winds that started at sunrise that day.

We dumped the boat in but the courtesy dock was not yet in, so Scott picked me up from shore and waves crashed in the back of the boat as he reversed. I was already a bit on edge. We cruised to the south end of the lake in our best efforts to get a reprieve from the wind and waves. We simply picked a shoreline and started working the weed edges with our spinners.

It didn’t take long before we had boated a few walleyes, the first of which was 25 inches, followed by a few nice keepers for the livewell, a handful of little guys, and another 25-inch fish.

Despite battling the wind with the trolling motor, we were pretty happy with the chance we took on this new lake, but the waves were starting to look treacherous on the other end and the wind was only forecasted to get worse, so we agreed on one more drift.

Right at the end of the drift I felt the notorious nibbles of a perch, I set the hook and hoped. Sure enough, it was a dandy of a North Dakota perch, and the only one I’d catch all summer. A perfect note to end the outing on… for me anyways. 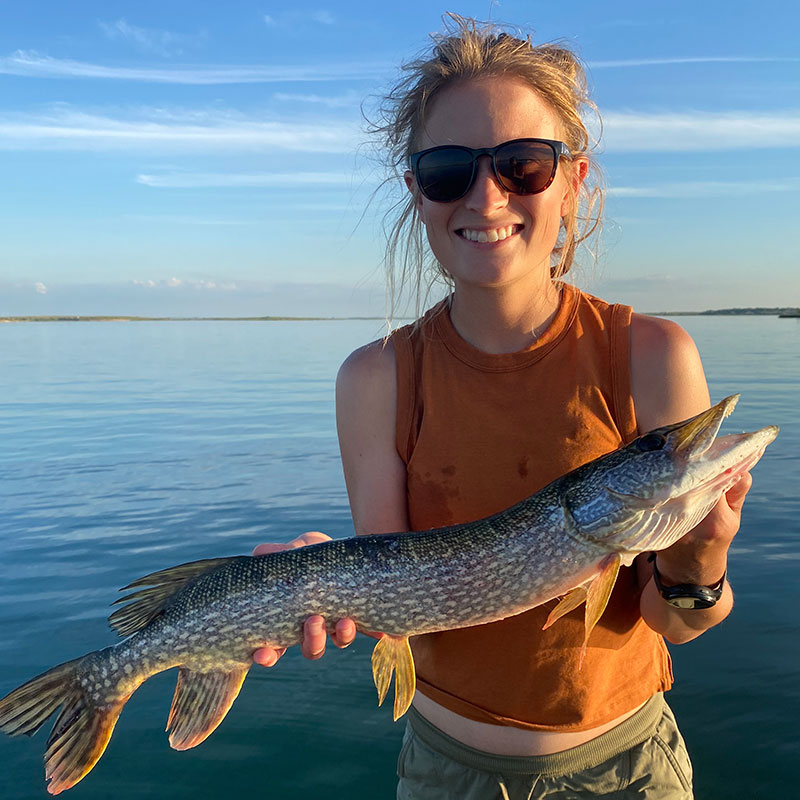 While many a pike get turned topside in our ice shanty in the winter months, we don’t spend a ton of time targeting them in the open water. Still, I figured plenty of these toothy critters would interrupt our other endeavors, but I think because I was now after one they evaded my hook for quite some time.

I lost several jigs to presumably pike on Alkaline one day so when I finally boated one I was not in the mood to take a picture with it, which I found myself regretting when I still didn’t technically have it checked off come July.

But another day on Audubon finally sealed the deal. As a Minnesotan, it’s one of my favorite lakes to fish because it’s one of the only lakes that reminds me of home, some cabins and docks, a diverse fishery with multiple species I love to catch and plenty of structure to explore.

We spent the majority of that hot day in pursuit of muskies, casting large baits. I thought if nothing else, they would produce a pike, but it wasn’t until I threw on a standard crankbait to troll back to the access that I would boat a small, but nevertheless valid, northern pike coming in at 24 inches. I’ve since upgraded to a 30-inch pike caught while pulling spinners on West Lake. 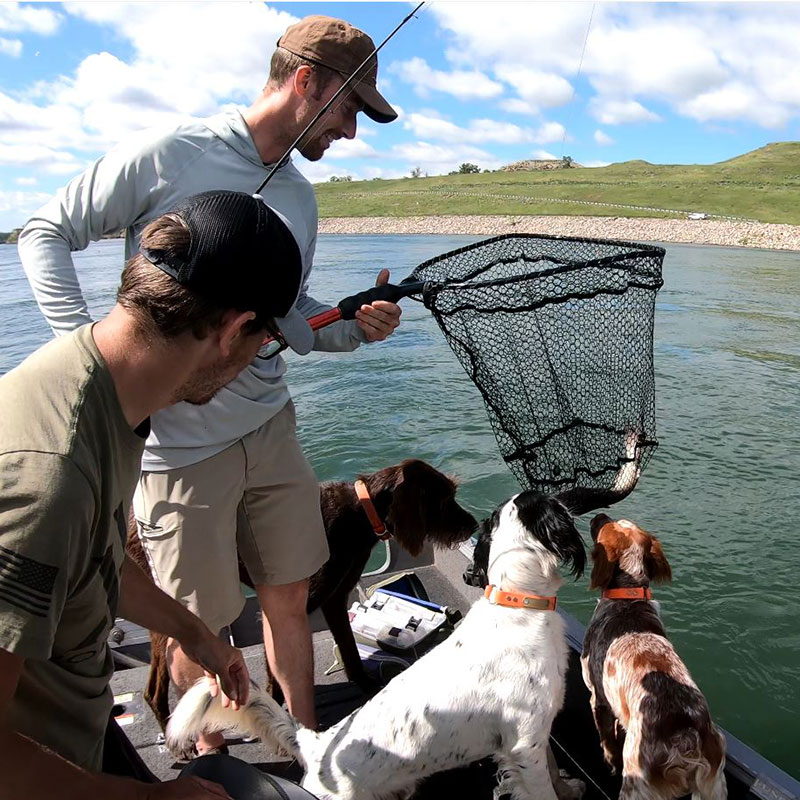 For the final species we planned our second annual “raining cats and dogs” outing to the Missouri River tailrace.

Last year, a hunting buddy and catfish connoisseur introduced us to the mid-summer catfish bite, and we had a blast fighting fish in the current and fending off our collective three bird dogs aboard as well.

The goal has and continues to simply be to end up with more cats aboard the boat than dogs. A few breaks on the bank of the Missouri to let the dogs cool off and eat snacks is a perfect way to spend a summer day.

We surpassed our goal and kept a livewell full of them and threw plenty back too. The fresh fillets inspired me to try a new fish taco recipe too!

So whether you’ve got a few species already checked off or never even fished before, there’s still time to get on the water (or shore) this summer to complete the challenge, make memories, explore new waters, fill the freezer and just enjoy some time outside. Good luck.