Baird’s Sparrows prefer native prairie, but will also utilize idle, tame grasslands, and grazed pastures. CRP, wet meadows, or dense grass within hay land and cropland is utilized to a lesser extent. Vegetative structure may influence use more so than vegetative species composition. Stands of grasses with narrow leaves are readily used whereas stands with broad-leaved grasses or abundant low-growing shrubs such as snowberry are often avoided. Native plant communities with needlegrass, grama, Junegrass, and bluestem species are correlated with high Baird’s Sparrow abundance in North Dakota. The percentage of club moss cover also is positively correlated to high abundance. Territory size in North Dakota ranges from .8 to 2.25 ha. Minimum area requirements for Baird’s Sparrows are unknown, but it is presumed large, contiguous tracts of native prairie are required to maintain populations. Forages on the ground for insects and seeds.

Key Areas and Conditions for Baird's Sparrows in North Dakota

Highest densities of Baird’s Sparrows are found in northwestern North Dakota, particularly in Divide, Williams, Burke, Mountrail and Ward counties. Much native prairie remains in McHenry and Kidder Counties and may also attract a high number of this species.

Parasitism by brown-headed cowbirds may be greater than for other grassland birds. Nest depredation is the most important factor affecting nest success, followed by weather. Pesticide acute toxicity may be a potential contributor to declines of grassland birds. Grassland birds avoid habitat within 150 meters of roads and 350 meters of oilfield infrastructure, likely due to anthropogenic disturbance of heavy traffic and/or changes in habitat near oil development. 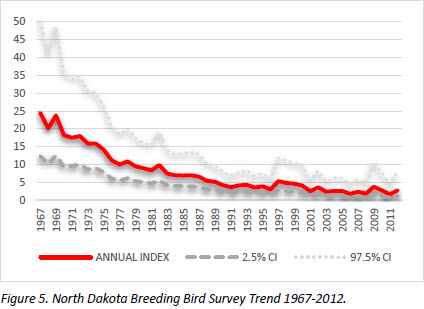 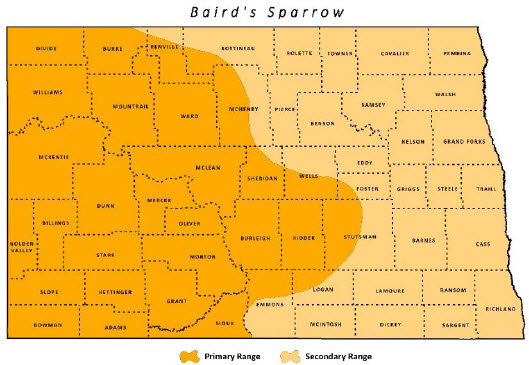