Bobolinks use areas of moderate to tall and dense vegetation, and moderately deep litter. Native and tame grasslands, hayland, light to moderately grazed pasture, no-till cropland, small-grain fields, old fields, wet meadows, CRP, and DNC habitats are used. In mixedgrass pastures, are positively correlated with percent grass cover, litter depth, density of low-growing shrubs such as snowberry, vegetation density, plant communities dominated by Kentucky bluegrass and native grass. Abundance is negatively correlated with percent clubmoss, bare ground, and communities dominated solely by native grass. Typically avoid areas with woody vegetation. Peak abundance of Bobolinks in a grassland is within 1-3 years post-burn, but decreases after 5 years post-burn. Will not use heavily grazed pastures, but high densities have been found in areas under shortduration grazing versus completely idle areas. May be area sensitive, requiring a minimum of 10-30 ha of prairie. Nest on the ground almost always beneath a large forb. Forages on a variety of seeds and insects.

Key Areas and Conditions for bobolink in North Dakota

Conversion of grassland to cropland, energy development and urban expansion. Degradation of grasslands from invasive plants, woody encroachment, succession, and loss of diversity. CRP provides important breeding habitat and is likely the reason for an increase in Bobolinks in North Dakota since the mid-1990s. It has been predicted if all CRP in North Dakota were converted back to cropland, the number of Bobolinks would be reduced by about 10%. Occurrence declines with increasing tall shrub cover and woodland cover. Open, treeless grasslands are required for maximum probability of occurrence.

Nests are occasionally parasitized by brown-headed cowbirds and nest predation is fairly high. Bobolinks may be killed on their wintering grounds where it is considered an agricultural pest. Mortality from collisions with communication towers. Grassland birds avoid habitat within 150 meters of roads and 350 meters of oilfield infrastructure, likely due to anthropogenic disturbance of heavy traffic and/or changes in habitat near oil development.

Nothing specific at this time. 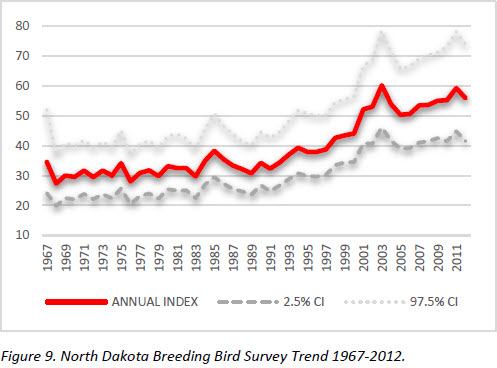 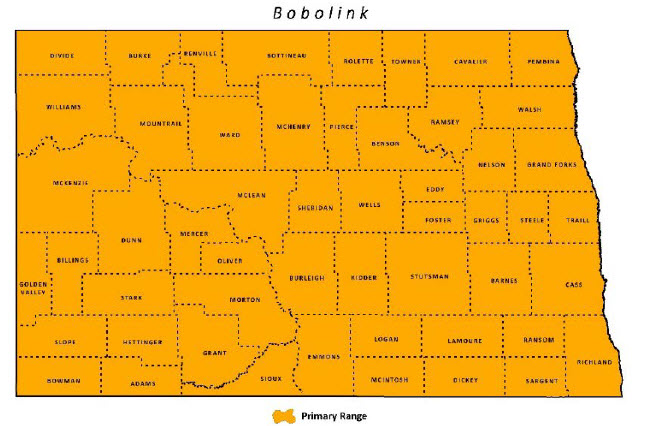