Dickcissels use a variety of grassland habitats with dense, moderate to tall vegetation and moderate litter depth. Old fields, hayfields, fencerows, hedgerows, road rights-of-way, CRP, DNC, or moderately grazed and idle prairie are utilized. Forbs also required for perching, nesting cover, and possibly increased invertebrate abundance. Nests are most often built above ground in tall grasses, forbs, shrubs, or trees but may also nest on the ground. Forages on the ground for seeds and insects.

Key Areas and Conditions for Dickcissel in North Dakota

No specific sites have been identified. The Dickcissel is seminomadic and its distribution and abundance varies annually in North Dakota.

The lack of burning, mowing, or grazing can affect suitable Dickcissel habitat by allowing for secondary succession. CRP is an important breeding habitat. It has been predicted if all CRP in North Dakota were converted to cropland, the number of Dickcissels would be reduced by about 17%.

Frequently and intensively parasitized by brown-headed cowbirds. In their wintering range of Venezuela, Dickcissels are poisoned when feeding on agricultural fields. Roosting birds are illegally sprayed with organophosphate and organochlorine pesticides, causing massive mortality. Some mortality from collisions with communication towers. 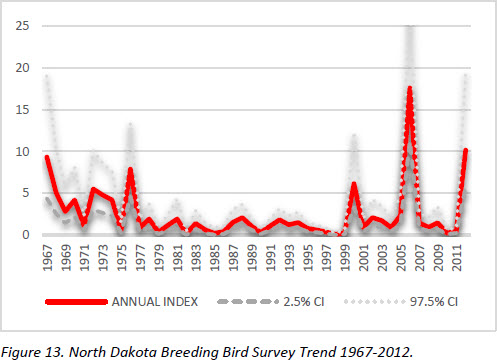 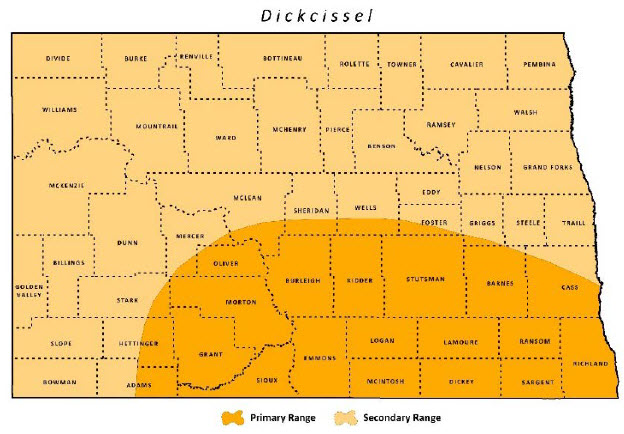