Lark Buntings prefer grassland of low to moderate height with a component of shrubs such as sagebrush. Weedy cropland, no-till or minimum-till cropland, CRP, hayland, and pastures also are used. Abundance may be positively correlated with litter depth. Nests are built on the ground under forbs, low shrubs, cactus, yucca, or tall grass for protection. Lark Buntings may be area sensitive and require large tracts of contiguous grassland. Feed on a variety of insects and seeds.

Key Areas and Conditions for Lark Bunting in North Dakota

No specific sites have been identified. Once common throughout state except for Red River Valley, Lark Buntings are most abundant south and west of the Missouri River.

Destruction and/or degradation of prairie will negatively affect the population, although this species has shown some adaptability to nesting in agricultural fields. However, risk of nest destruction by farm machinery is probable. Burning removes shrub cover and Lark Buntings may avoid frequently burned grasslands. CRP benefits to Lark Buntings. It has been predicted if all CRP in North Dakota were converted back to cropland, the number of Lark Buntings would be reduced by about 17%.

Parasitism by brown-headed cowbirds is infrequent. Collisions with vehicles during the breeding season occur. Lark Buntings appear susceptible to drowning in stock water tanks, especially those containing mats of algae. It is presumed the birds are attracted to this water source, become entangled in the algae and drown. 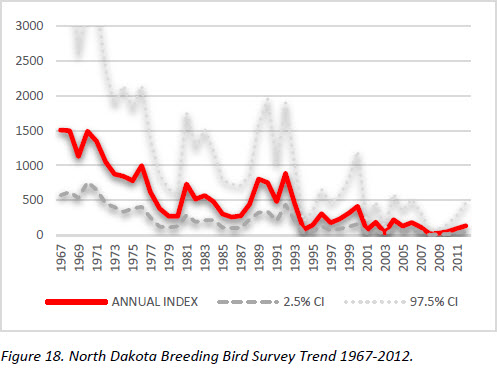 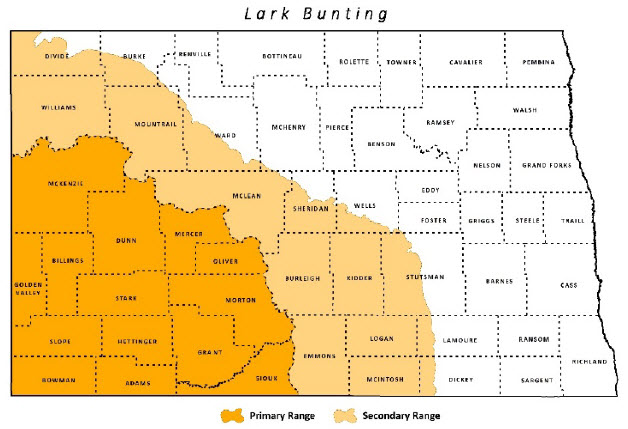