Le Conte’s Sparrows use open habitat of marshy or sedge meadows, moist areas of level uplands and lowlands, native or tame prairie, CRP, DNC, hayfields, and idle pasture. Ares of tall, thick herbaceous vegetation and dense litter are used. Breed in hummocky alkali fens, tallgrass prairie, wet-meadow zones of wetlands, and tame hayfields. Appear to avoid areas of shrubs and other woody vegetation. Associated with a high amount of grass cover, particularly broad-leaved introduced grasses. Nest on or above the ground in dense vegetation. Usually forage on the ground for arthropods and seeds.

Presence of Le Conte’s Sparrow is affected by the yearly moisture conditions. CRP has shown to be important breeding habitat for this species, but only under wet conditions. Deemed woodland sensitive,increased woodland cover negatively affects this species.Annual grazing, mowing, and haying may negatively affect their presence, but periodic maintenance of grassland is needed to stimulate grass growth or prevent woody encroachment.

Nest parasitism is low. Some mortality from collisions with communication towers. 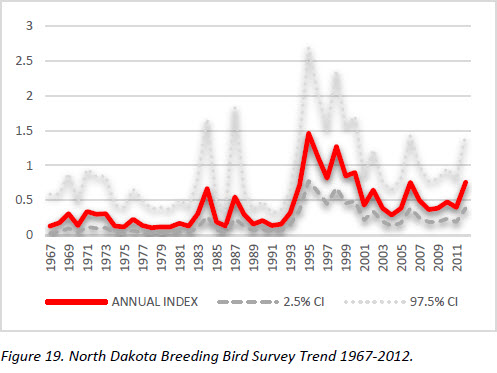 According to the Partners in Flight Landbird Conservation Plan, long-term population trend monitoring such as the Breeding Bird Survey is inadequate in the northern range for this species. Future monitoring proposals should follow recommendations North American Bird Conservation Initiative ‘Opportunities for Improving Avian Monitoring’. 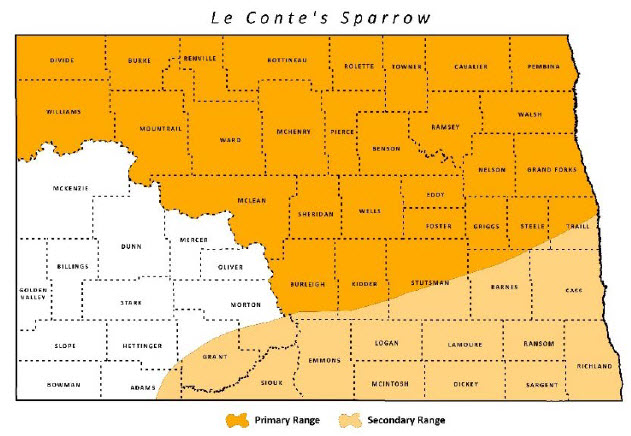