Loggerhead Shrikes use open habitat of short grass interspersed with bare ground and shrubs or low trees. They can be found using a variety of habitats including prairies, pastures, sagebrush, fencerows, shelterbelts, riparian areas, open woodlands, farmsteads, suburban areas, mowed road rights-of-way, and cemeteries. Scattered thick or thorny shrubs and trees are used for nesting, hunting perches, and prey impalement locations. Often an isolated tree within these habitats is chosen for the nest site. Nests are well concealed and placed 1-2.5 meters above the ground. Forage over shorter grass for arthropods, mammals, birds, reptiles, amphibians, and sometimes carrion. Average territory is 6-9 ha.

Key Areas and Conditions for Loggerhead Shrike in North Dakota

No specific sites have been identified. Most abundant west of the Missouri River, less common in the Red River Valley and Drift Prairie.

Conversion of grassland to cropland, energy development and urban expansion. Degradation of grasslands from invasive plants, succession, and loss of diversity. Excessive tree encroachment into prairie can have negative impacts. However, removal of all small trees and shrubs will limit nesting sites.

A number may be killed by automobiles when plucking injured or dead insects from roads. Brown-headed cowbird parasitism occurs but at low rates. The effect of contaminants is unclear but some data suggests the species decline coincides with the increased use of organochlorines in the 1940s-70s. Pesticides can limit prey abundance. 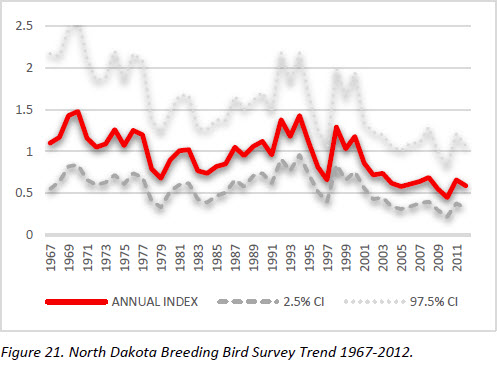 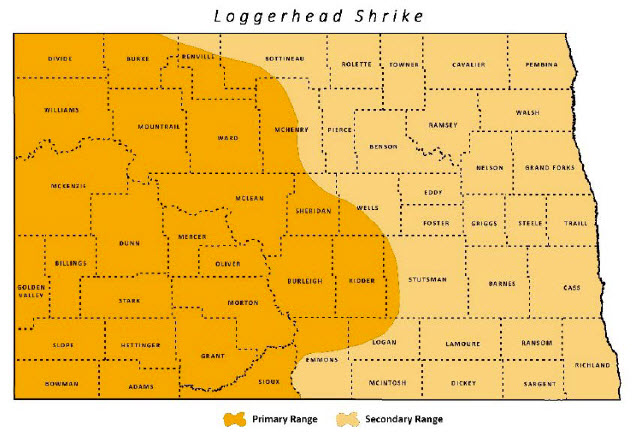