Sharp-tailed Grouse are most often found in relatively undisturbed mixed-grass prairie with patches of small trees and shrubs. CRP grasslands are also very important habitat for this species. Leks, or the dancing grounds used during the breeding season to attract mates, are typically located on elevated areas and are often characterized by less vegetation than the surrounding area. Nests are located fairly close, often within 0.5 mile, to then lek. Nest in lightly grazed native prairie, haylands, CRP, and may be located close to the margin of a thicket of shrubs or small trees. Switchgrass has been shown to provide an important habitat component in southeastern North Dakota. During winter grouse depend more on forested habitats, particularly during harsher winters. Feed primarily on buds, seeds, insects, fruits, and forbs.

Key Areas and Conditions for Sharp-tailed Grouse in North Dakota

Most common in the Missouri Slope region. Many leks have been identified throughout the state. These and the surrounding area (at a minimum, within 1 mile) should be of top priority for conservation.

Conversion of grassland to cropland, energy development and urban expansion. Degradation of grasslands from invasive plants, woody encroachment, succession, and loss of diversity. The expiration of CRP grasslands is also of concern and will result in population declines. Degradation due to livestock overuse can also reduce habitat quality.

Mortality such as birds flying into electric wires, fences, utility wires, and being hit by automobiles occur. Viewing grouse dancing on leks during the spring is a popular activity. Males appear more tolerant of this disturbance than females. 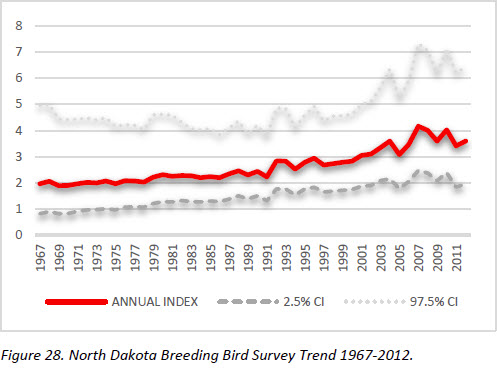 According to the Partners in Flight Landbird Conservation Plan, long-term population trend monitoring such as the Breeding Bird Survey produces imprecise trends for this species. No additional monitoring is needed at this time as the NDGFD will continue in the lead role of obtaining population date on Sharp-tailed Grouse. 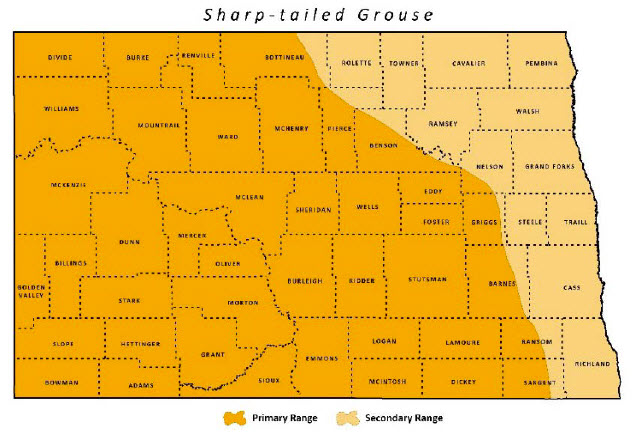