Swainson’s Hawks are frequently associated with open grasslands interspersed with scattered trees or shrubs. Uses shortgrass, mixed-grass, tallgrass prairie, riparian areas, isolated trees, shelterbelts, pasture, hayland, cropland, and wetland borders. Most often nest in trees and shrubs that are isolated, clumped, or in a shelterbelt but will occasionally nest on the ground. Primary prey includes small mammals, Richardson’s ground squirrels, blacktailed prairie dogs, and insects such as grasshoppers and dragonflies, particularly during migration and on wintering grounds of South America.

Key Areas and Conditions for Swainson's Hawk in North Dakota

Fairly common throughout much of North Dakota except for the Red River Valley.

Human activities since settlement may have increased the availability of nest sites in some areas, e.g. planting shelterbelts. However, the destruction of native prairie could affect Richardson’s ground squirrel population in North Dakota, resulting in decreased food availability for Swainson’s Hawks.

Nest disturbance, depending on timing during incubation, may result in desertion. Nests near roads or land easily accessed by people are less successful than nests away from well-traveled areas. Pesticide contamination does not appear to be a noteworthy factor for reduced nest production from eggshell thinning. Swainson’s Hawks are sometimes shot by humans who consider them a pest, or fear they are preying upon game birds. Some mortality from collisions with power lines, wind turbines, vehicles, or electrocution, or getting caught in fences. 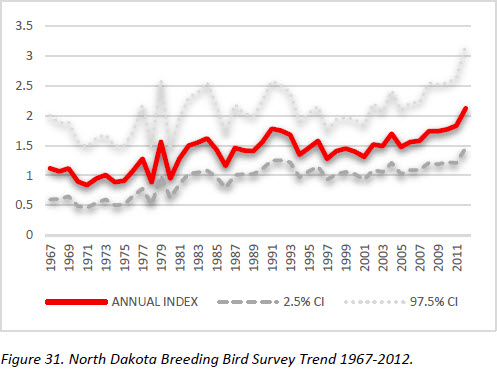 According to the Partners in Flight Landbird Conservation Plan, long-term population trend monitoring such as the Breeding Bird Survey is generally considered adequate, but some issues may not have been accounted for (e.g. bias). Monitoring plans should follow recommendations of the North American Bird Conservation Initiative ‘Opportunities for Improving Avian Monitoring’. 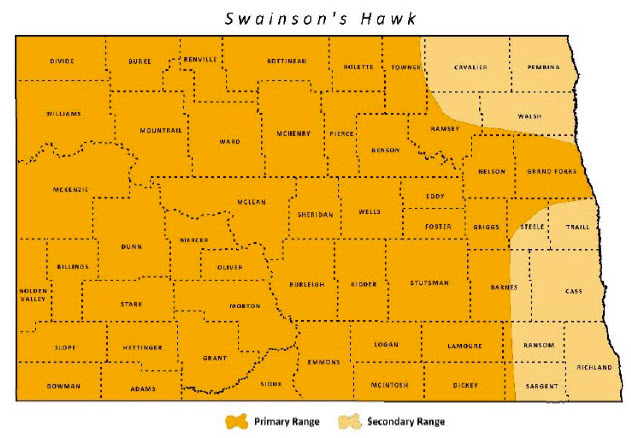